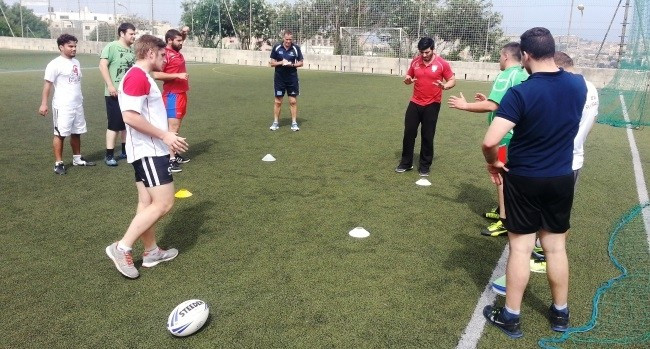 With RLEF Coaching Manager Martin Crick in Malta overseeing the course, the delivery was led by coach educator and national team head coach Anthony Micallef, and the course incorporating different sports into the weekend, and discussions on key EU sports topics such as dual career athlete guidelines.

Maltese football legend Carmel Busuttil and Maltese squash champion Bradley Hindle-Deguara delivered talks on coaching and the transition from player to coach; both from their own personal experiences on the world stage.

Coaches representing all but one of the MRL Championship clubs took part in the course that included modules on role of a coach, core skills, fitness of a rugby league player and team structure and organisation.

Sam Blyton-Keep, who passed the training and is now a newly qualified coach educator, said the course was the first in a series of rugby league courses to be held in Malta: “Courses will be held every year and plans are underway to organise the Level 1 assessment phase in Gozo next month” said the 21-year-old Malta international. Level 1 coach certification permits coaches to teach players at schools, university and club level in Malta”.

The course was well received by coaches, with the MRL now preparing for next month’s RLEF Match Officials Course at the same venue to complete the LDP project for Malta.

Crick added, “It was a pleasure to visit Malta and experience the enthusiasm and commitment of the coaches. Anthony Micallef the national coach did a great job organising the course and the attendees showed great promise. Rugby league in Malta is on the up and I’m looking forward to see Malta play Belgium at Headingley in six weeks’ time”.