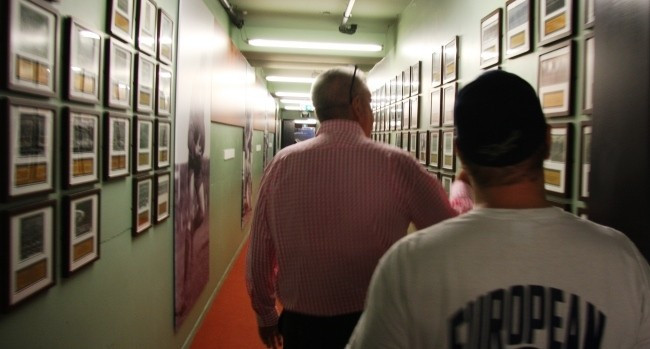 Chrudim, who were established in 2011, came to the attention of the famous NRL outfit when Rabbitohs CEO Shane Richardson was a guest of the CZRLA at their annual awards night last year and also attended the Grand Final on the same weekend, witnessing Chrudim’s win over a gallant Slavia Hradec Kralove  to complete the double of the League Leaders and Premiers.

To consolidate the partnership a CZRLA contingent met with the South Sydney management in Sydney recently, where Richardson took them on a tour of the club’s impressive Redfern facilities and they observed a torrid elite squad training session.

The delegation discussed rugby league development in the Czech Republic with South Sydney Football Manager and former player Mark Ellison and were presented with a full 2013 Rabbitohs playing kit, which will be worn by Chrudim in their 2014 campaign.

Chrudim Club Manager and CZRLA Board member Bruno Jasiczek enthused: “It was a great to have the opportunity to be shown round such an historic facility and that such a legendary rugby league name are taking an interest in what we are doing with developing the game in the Czech Republic. We at the Chrudim Rugby League Club are honoured to become part of the Rabbitohs family and are greatly looking forward to playing as the Rabbitohs. We are also looking forward to the day a Chrudim player will be representing South Sydney in the NRL!”

Pictured: Shane Richardson leads a CZRLA delegation through the club.