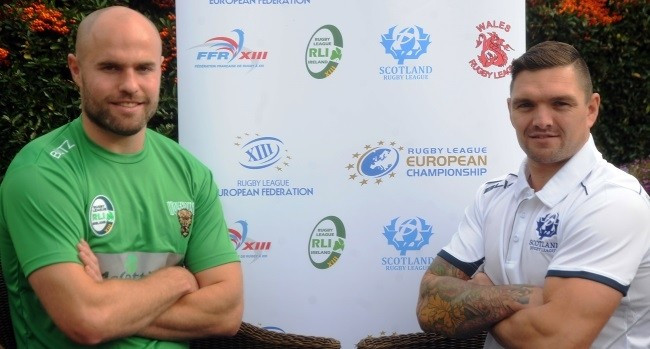 Scotland and Ireland, who were both narrowly beaten in the opening round of games, have announced their squads for the European Championship clash at Netherdale, Galashiels tomorrow evening (kick off 7.30pm). Scotland have included three uncapped players, two of whom will be hoping to debut in front of their home fans. Half-back Lewis Clarke and winger Craig Robertson both play league for Edinburgh Eagles and union for top flight Scottish club Gala RFC.

Edinburgian Clarke, an apprentice lineman for Scottish Power in Galashiels, has progressed through the Scotland RL ranks from the U18s, while Robertson is a newcomer to the sport. The third uncapped player is Clarke's Scotland U19 team-mate Shane Toal, the Barrow winger replacing Hull KR forward Adam Walker in the 19.

With backs Richard Harris (Warrington Wolves), Alex Walker (London Broncos) and Glaswegian Scott Plumridge – all of whom are 20 or younger - all getting debuts last weekend against Wales, Bravehearts head coach Steve McCormack is relying on youth, in a game the defending champions have to win to keep their title defence alive.

“We are going to have a really inexperienced backline on Friday night but that is the way lads get an opportunity,” McCormack said. “Last week David Scott was our best player and he’s a perfect example for these kids to look to – about five years ago he came in from our U19s and got a game, took his chance and has been with us ever since and made a career in the sport. Lads like Alex Walker and Scott Plumridge could be part of the Scotland team for the next ten years.”

Ireland make only one change to the squad that pushed France all the way in Albi, Haydn Peacock is out injured and Sean Hesketh comes in to replace him.

Head coach Mark Aston noted: “I was proud of the boys on Saturday. We had had a long journey to get to Albi and a good shot at the game, we were still in it with ten minutes left at 14-20 down. The French had a lot more possession than us in the second half and we did tire towards the end but the score flattered them a little bit. We're still in this competition and all we can do now is win our games and hope that other results go for us. The Scots were the only team to beat us in last year’s competition and we'll be keen to put that right tomorrow night.”