BIG WINS AT THE START OF BALKAN RUGBY LEAGUE 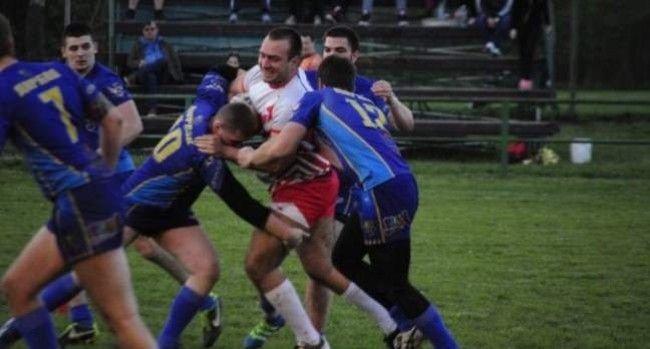 Convincing victories for Belgrade rivals Red Star and Partizan headlined the start of the first ever European club championship, the Balkan Super League. While Partizan’s win at Bosnia Herzegovina’s Vitez (66:10) was expected in Group A, Red Star's blowout of the Serbian champions Dorcol (46:0) in Group B will go down in history as the biggest win in the bitter cross town rivalry.

Dorcol’s 14 national titles made them clear favourites in the inaugural eight club regional tournament, but a dominant performance in the Serbian derby gives the Reds and Whites the  upper hand in the historic competition. It was all Red Star at the Ada Ciganlija stadium in the Belgrade, with the hosts scoring six tries in the first half (30:0).

Playing without several key players including Serbian internationals captain Dalibor Vukanovic, Stevan Stevanovic and Stefan Nedeljkovic, Dorcol didn’t have the firepower to keep up with their rivals. Caught up in the continued pressure of Red Star, DorÄ‡ol’s youngsters couldn’t even score a consolation try, even though they slowed the hosts in the second half. But they didn’t prevent their arch rivals handing them the biggest loss in the club’s history.

It was just a seventh win for the Red Star in the 32 games played against Dorcol, but twice in three weeks the Red and Whites have heavily defeated their cross town rivals, with also a win in round 2. of the Serbian First division (50:20).

Red Star fly half Vojislav Dedic acknowledged the importance of the historic day for the region “We are obviously happy for the big win, but more important is that this weekend we started a new chapter for the rugby league in Balkans. It is exciting to be a part of the first ever championship and we are eager to play teams from other neighbourhood countries”.

In the first Group A match, Partizan routed Vitez, but the hosts earned the praise for their spirited effort in the first ever international match.