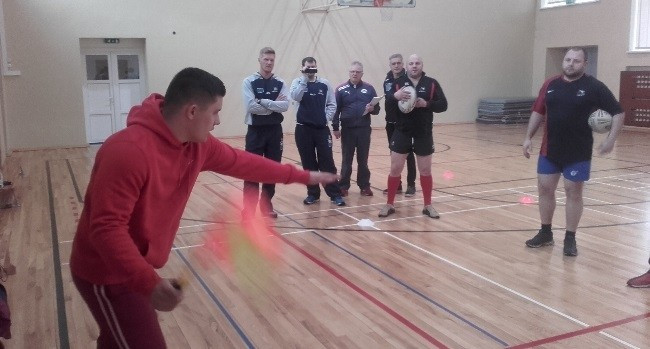 The course was part of the RLEF-EU Training and Education Portal project, and was attended by Ukrainian and Polish cluster colleagues, as well as guest French officials and supervised by RLEF MO manager Tom Mather.

“The RLEF workshop was an innovative opportunity to work collaboratively in an international context to train rugby league match officials of the future, for consistency, empowerment and assertiveness,” said Richard Frileux, head of the French federation’s Commission Centrale de l’Arbitrage. He was accompanied by colleague Jerome Cavalli who added: “It was a good way for us to get started on this project. We learned a lot as observers and understand the rationale better.”

Ukrainian Federation of Rugby League educator Denys Cherniev led most of the sessions as part of his own personal development, while Polska Rugby XIII official Bartlomiej Sierota was heavily involved in the critical analysis phase.

“I was really encouraged,” said Mather. “The Latvian educators had clearly improved and it was great seeing a Ukrainian official manage virtually all the delivery. I was very pleased to spend time with Richard and Jerome to discuss France’s leadership role in European match official development.”

The TEP is a three-year, €723.000 investment into capacity building through good governance and technical training, funded by €466.000 from the EU’s Erasmus+ project and the remainder from the RLIF and five of its full members. It is intended to build the knowledge and skills of the RLEF’s 21 European members, divided into six regional clusters, through high quality training and mentoring, while granting opportunities to share experiences amongst fellow Europeans dedicated to rugby league development.