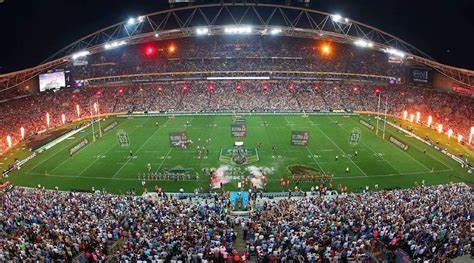 For the first time, matches from the Australian men’s National Rugby League (NRL) are being broadcast in Africa, as part of a deal agreed by The Walt Disney Company Africa and shown on its ESPN channels.

The 2021 competition is airing live on ESPN (DStv 218) and ESPN2 (DStv 219) and has already had a significant response across the continent, where more nations have set up domestic leagues. Recently, Nigeria, Ghana and Cameroon have been upgraded to affiliate status by the International Rugby League (IRL).

“The reaction so far across a variety of African nations has been outstanding and there has been a highly encouraging uptake of the games,” said Middle East Africa regional director, Remond Safi. “Africa is a vibrant but hugely untapped market for the sport in terms of natural athletes and broadening the competitive base.

“The opportunity to watch some of the very best players in the world ply their trade in the toughest competition will not only provide benchmarks for those here to aspire to, but will also provide more impact and awareness that national governing bodies here can harness to increase interest and participation, it a win-win for everyone.”

NRL Chief Executive Andrew Abdo added: “Rugby League is exceptional entertainment, high speed, high ball in play time, and features some of the best athletes in the world. I've got no doubt audiences in Africa will love the additional pace and athleticism showcased by our players.”

Kyle de Klerk, director of sports commercial & business for The Walt Disney Company Africa, noted: “We are thrilled to have acquired the rights of the National Rugby League, expanding our commitment to bringing premier content to audiences and growing the diversity of programming on ESPN.”

Safi is also hoping that the initiative will become two-way, offering opportunities to showcase the best of the games in Africa as the sport continues to spread. “We are dealing with a number of applications from other countries, and full member nation South Africa is becoming a major driver here in the spreading the message,” he confirmed. “There could be an amazing opportunity for live coverage of the 2022 MEA Championship there, for example, which would undoubtedly raise the profile and interest even further.”