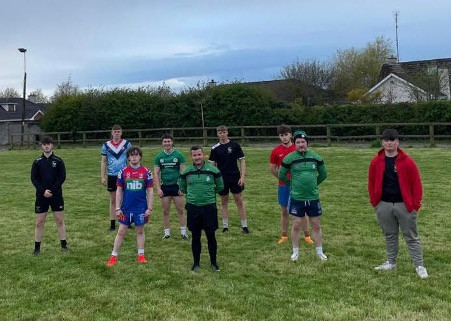 Both Bernard and Conor took the opportunity last evening to visit the Athboy Fighting Irish Club’s first youth’s training session under the Government’s latest relaxing of restrictions, photo below.

17 year old Stevie Kane (3rd from left in the photo) came along to try out Rugby League and being a big fan of the sport, Stevie equipped himself well and enthusiastically gave it all for the 2 hour session. What makes Stevies’ story extra special is that he lives with cerebral palsy and showed the coaches his great strength and determination in not letting it get in the way of his desire to play the game.

In 2022 RLI will be launching Physical Disability Rugby League (PDRL) into Ireland for the first time – a fast growing version of the game, especially in Australia and England with many NRL and Super League clubs fielding teams in PDRL. We have no doubt that Stevie will be pushing for his place on the Ireland Team next year.