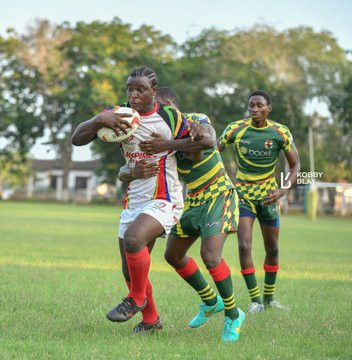 Ghana Rugby League head coach Andy Gilvary has named a 20-man squad for Sunday's game against a President’s XIII select side, and in preparation for the 2022 Middle East Africa Championship.

It comes after the successful completion of a three game Origin Series. The Origin sides were named after pioneers of the sport in the country, with team Giwa-McNeil taking the men’s series by two games to nil with one drawn over team Safi, and the women finishing equal with one win each and one game drawn; the contests played at the University of Ghana’s Field Ajax 1 and Mensah Sarbah Field, in Legon.

Captain of the Safi XIII women’s team, Rosemary Sewornu, said: “Origin Cup is one of the best games I have played. The teamwork from both teams was impressive. Rugby league and female contact games are here to stay. Though there is a visible improvement in the gameplay of both teams, there's more room for improvement.”

Gilvary was present for the last round of matches and noted: “It is fantastic to see the development in both men and women's rugby league in Ghana and hopefully in a couple of years we’ll see both play in a high level international tournament.

“The three-match Origin series, which recognises the contributions of the phenomenal Giwa-McNeil family and Africa development manager Remond Safi, is part of establishing that pathway and I’m looking forward to being able to continue the work of talent identification. I sent them the programme for it in May and they immediately took steps to get it off the ground.

“I like to play to their strengths, they are big, fast, strong, physical and aggressive, raw rugby league but an untapped source of talent – there are some very early discussions with Super League clubs about linking up to capitalise on that pipeline; it would be a huge return for very little resource.”

Gilvary added: “Ghana RL got back up and running in January this year, the government halted it again until March but they’ve been flying ever since getting the domestic championship going, along with women’s and girls and juniors, which are flourishing. They just want to get out there and play and everyone works tirelessly to give that opportunity, the committee get there first to put out the substitute benches and leave last after picking up the rubbish, the game doesn’t survive without them.”

His visit has also enabled him to further a Kits for Ghana project. “My university mates sponsored the jerseys for Origin and part of this has allowed me to do something I’ve wanted to for ages and that’s start the 1jersey project (www.1jersey.co.uk) to get unused kits over here, which is starting to come to fruition.

“I’ve been round collecting donations from such as Burtonwood, Derby, Warrington, Glasgow, the match official’s department at St Helens, Penketh, Oxford University, Castleford Masters, Richmond and London RL, Wigan Bulldogs, Sheffield Hallam Alumni, Garswood Stags, Leeds and Optimum Sports and brought over as much as I can.

“Luke Srama, a good friend in Australia, is helping me out on promoting the scheme and getting some kit shipped over from there. It’s all self-funded, like so much of the development work that goes on in the game, but it’s been brilliant. The beauty of Africa is that so many nations seem to be accelerating at the same pace, which is great for the sport.”

Sara Giwa-McNeil commented: “We continue to be delighted with how well rugby league is being received in Ghana. Being of mixed Ghanaian and Nigerian parentage, it’s an honour and privilege to see the impact that our sponsorship is having on the game.”