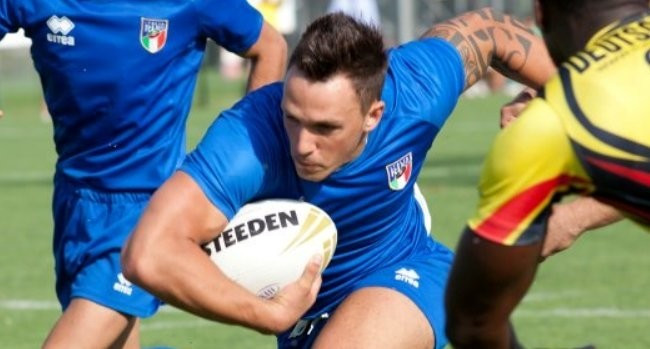 The Federazione Italiana Rugby League has announced an initial 47-man train-on squad three weeks ahead of Italy’s competition-defining clash against Russia in the European Shield 2012-13. The lure of the forthcoming World Cup means that Italy assistant coach Paul Broadbent, who resumes his control of the Azzurri’s European Shield campaign, has an abundance of talent available. University of Gloucestershire All Golds scrum half Matt Bradley, Hemel’s Joel Miranda and young Warrington centre James Saltenstall headline a clutch of 11 newcomers to the squad.

“Mathew Bradley is a young halfback with the ability to organise a team very well and with a good kicking game,” said Broadbent, who saw his side crush Germany at home last year, but lose overseas to Serbia and Russia. “Joel Miranda is a hooker with a wealth of experience and his game awareness will challenge teams in and around the ruck area,” he added. While Saltenstall is joined by former Castleford wingman Richard Lepori.

Broadbent, who will visit Italy several times to oversee elite camps and run his eye over the domestic season continued: “The squad is looking very exciting; everyone wants to be part of this new chapter in the rapidly expanding history of Italian rugby league.”

“Last season was a steep learning curve for our players,” admitted his assistant coach Kelly Rolleston who is in charge of the current domestic champions XIII del Ducato. “I expect players like Davide Rancati, Ivan Barani, Chris De Meyer, Nourou Bance and Giacomo Alfonsi will be much better players from the experience. With Fabrizio Ciaurro our top performer in the European Shield now having experience in the UK I expect him to play a big part in this year’s campaign.”

Russia’s victory in Belgrade last month means that victory in the Stadio Augusteo in the town of Este will ensure the 2012-13 European Shield will be on the plane back to Moscow.