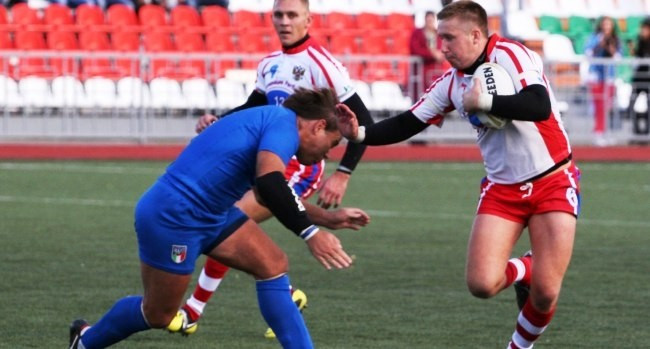 Top of the table, unbeaten Russia travel to Este, 70km south-west of Venice,  this weekend for what could be the decisive match of the 2012-13 European Shield. Should the Bears win a fifth consecutive game it will secure the trophy against the only other team still in with a chance of ultimate victory.

Italy assistant coach Paul Broadbent, who is in charge of the Azzurri’s Shield campaign, has named a strong 20-man squad including five players from the French championship alongside Chris Vitalini of Gloucestershire All Golds and debutant James Saltenstall from Warrington Wolves. French Elite trio Jonathon Marcinczak, cup winner Ray Nasso and Remi Fontana are also in contention while up front Italy will be led by Cedric Prizzon, who topped both their tackles and carries in all three matches last year.

From the domestic clubs, Brescia’s Pierangelo Ceretti and North West Roosters duo Gioele Celerino and Mattia Saracco  are called up for the first time after strong performances in Serie A, but two of last year’s strongest contributors, Nourou Bance and Giacomo Alfonsi, are out injured.

“Everyone at FIRL is very excited about what's going on in the domestic game,” Broadbent said. “Interest in rugby league has developed massively with the World Cup coming up and everyone wanting to be involved in it. We are really looking forward to the game against Russia to continue the development of our professionalism, commitment and understanding needed to be a force in rugby league. The new players coming in from new clubs in new areas bring great enthusiasm and we now look forward to playing an in-form, confident Russian side to see how far we have come.”

Russia has been beset by withdrawals, most notably the loss of powerful prop Sergey Konstantinov, the man-of-the-match in two of their four Shield matches so far, but out with the broken arm sustained against Serbia in May. Strong forwards Victor Tolstov and Sergey Zuev are away with the Russian student team at their World Cup, while loose forward Sergey Gaponov and strike centre Petr Botnarash are unavailable, meaning coach Eduard Ososkov has drafted in young Storm second row Konstantin Roschin and his experienced club-mate, utility Denis Chuprin.

"We know that Italy is a very strong team with a skilful, quick and experienced core of players from England and France,” said Ososkov. “But we will try to do our best under the circumstances.”

The match kicks off at 19.30 hrs in Este’s Stadio Augusteo and is preceded by an U18s clash.