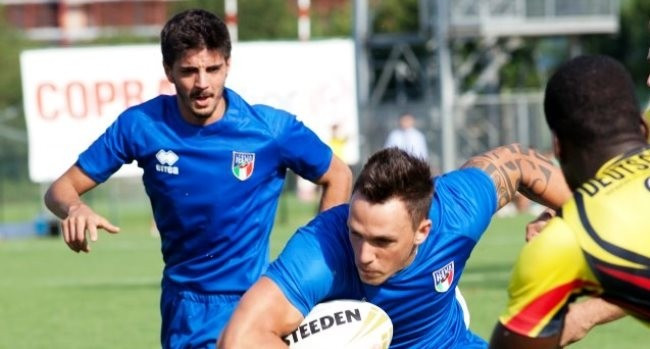 Italy’s outside hopes of picking up the European Shield crown go on the line against holders Germany on Saturday, in Karlsruhe. The Azzurri are aiming to move to within two points of Russia at the top of the standings as the competition enters its final stages.

They start as favourites, having beaten the Germans 72-10 at home in the reverse fixture last year. The German squad contains some veteran campaigners including the likes of Christoph Huber, Benedikt Rehm, Liam Doughton and Fabrice Fehlemann who all featured in Germany’s first meeting with Italy in 2008. Kristian Keinhorst, their most capped international, picks up his 16th cap, however it will be the first appearance without any of his world record breaking brothers alongside him. Nick is injured, Leeds Rhinos star Jimmy is unavailable on duty in Super League and twin brother Markus now resides in Canada, although will be travelling out for the clash against Russia in two weeks’ time.

After impressing in last year’s matches, Vinnie Spies returns to the squad and is joined by Mawuli Amefia and Daniel Lortz, who featured in the 2012 heavy defeat against Italy. Andrew Hoggins, who has been enjoying a maiden season in RFL Championship 1 with Oxford and former Wakefield Trinity Wildcats academy product Del Bartlett will add some experience to a side that is eager to register their first win over Italy in four attempts.

“Last year’s preparations for the Italy game were far from ideal and that was reflected in the heavy defeat we suffered,” said Germany coach Dan Stocks. “Ten of the players in the current squad played in that match and I know are keen to make amends for that performance.”

New faces to the Italian squad include 20 year old Simone Boscolo from Ariete Este. The young hooker has put in some eye-catching performances in the domestic competition and has forced his way into the Italian side with a good performance in the State of Origin. Michele Verardi has also been selected after overshadowing some of the more experienced players and is the first player form the newly formed Tirreno Sharks to represent Italy. Runners up in the domestic competition, North West Roosters have the largest group of players chosen with Mattia Saracco and Idammou El Mehdi set to make their debuts.

Pictured: Fabrizio Ciaurro and Ivan Barani will look to repeat the dose handed out to Germany.