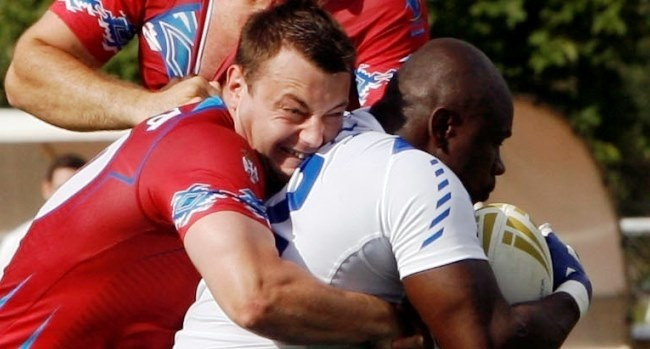 Italy’s domestic players get a further chance to stake their claim for a World Cup place when they face Serbia in the final game of the 2012-13 European Shield this Saturday in Este, Veneto.

Despite Russia having taken the trophy, the Azzuri, who will next play against England on 19 October in a World Cup warm up fixture in Salford, are ahead of Serbia in second place and keen to end the campaign on a high, according to assistant coach Kelly Rolleston. “Our goal at the start of this year’s section of the European Shield was to go through unbeaten and we have put in two good performances against Russia and Germany which puts us in a position to achieve that goal,” he said. “We expect our players to be in top form with the RLWC just over a month away. A number of them will have a chance to push for a place in the Italian squad.”

Paul Broadbent has a settled squad to choose from including play-makers Remi Fontana and Ray Nasso, industrious forwards Cedric Prizzon and Chris Vitalini, while Fabrizio Ciaurro and Chris De Meyer have been every bit as influential throughout the course of the campaign. Rising stars Gioele Celerino and debutant Riccardo Scandurra have spent time in England training with Sheffield Eagles and Leeds Rhinos after impressing Broadbent.

Serbia head coach Marko JankoviÄ‡ believes the match is an important stepping stone for his side. He noted, "Although the Shield winner is already known, this game is still really important. During this two-year cycle we heavily rejuvenated our squad and the test against a World Cup participant is a high point of our campaign. Italy, as a huge sporting nation, is always a big challenge and I believe that all the conditions for an attractive match are in place."

JankoviÄ‡’s squad is bolstered by the recall of Carpentras pair Danilo DeliÄ‡ and Zoran PešiÄ‡, and powerful front rowers Dejan LukeniÄ‡ and Lazar Å½ivkoviÄ‡, all of whom missed May’s defeat to Russia. The squad prepared with a 32-4 trial win against Serbia U20 as well as game three of the Serbian Origin Cup, which saw Country take out the series 2-1 against a Belgrade Select.

Pictured: Zikovic and Muyodi get to grips in Belgrade last year.