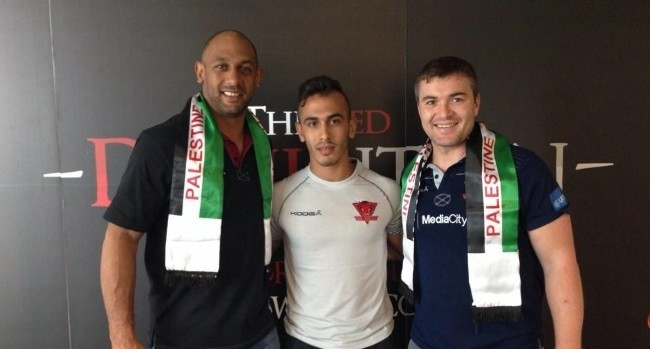 Palestine Rugby League has taken a further step forward with one of its many talented youngsters, Khaled Issa, having trained with Super League club Salford Red Devils. The invitation came from Salford’s Palestinian owner Dr Marwan Koukash who hails from Burin in the West Bank and was keen to assist the Palestinian Rugby League and establish a permanent link, after initial discussions with them in London last month.

Issa, who was born in Lebanon, lives in Palestinian refugee camp Borj al Barajneand was introduced to the sport there by PRL founders, brothers Ahmad and Rabie El Masri. Ahmad El Masri spent a week with the Hull FC first team in early 2011 gaining experience and he, along with Rabie, Issa and another young Palestinian player, Samir Souri, have all received coach-tutor training. Issa trained with the Salford Academy and first team squad under the guidance of Head Coach Iestyn Harris.

PRL General Secretary George Clarke commented: “We hope Khaled is one of many more to come across, his experiences will be greatly beneficial and we're confident he can translate them to help develop his peers”.

PRL founder Rabie El Masri added: “Khaled is just the start of what we see as a long term project. We are confident this can become a regular link with more youngsters coming to train with Salford and it will boost our development programme. We hope to introduce a domestic competition in the West Bank over the next few years to provide us with a good platform for international fixtures. On behalf of the PRL I'd like to thank Dr Koukash, (Salford CEO) Martin Vickers and (actor and funder) David Morrissey for helping us with this project”.

“This is a fantastic opportunity for Khaled, he'll get some great experience training alongside some top players and in a professional environment,” said RLEF Middle East and Africa Director Remond Safi. “It shows the enthusiasm for rugby league in the region and we hope to see more players from MEA walk the path of Khaled over the coming years.”