Wales had a tough outing against England on Saturday, as the hosts won the one-off Wheelchair test 102-22, giving the English two wins out of three in their female-male-wheelchair international weekend.

Despite Wales having some good spells during the game, England took them to the sword as the Welsh conceded 100 points for the first time in four years.

Wales started well, winning a penalty from kick-off and straight away they took the lead, Scott Trigg-Turner grounding in the corner. Andrew Higgins converted.

England struck back straight away. Skipper Tom Halliwell pounced on his own grubber from the final tackle of a set to score under the sticks. Wayne Boardman converted.

Halliwell was denied a second near to the ten-minute mark after he received a pass that was made after a tackle.

Wales continued to pressure the England line and as the hosts continued to be penalised for off-side, the visitors were close to scoring, but Trigg-Turner mishandled as he was diving for the line.

But when England got back onto the attack, they scored, as Adam Rigby drove through in the corner. Halliwell failed to convert.

From kick-off, Joe Coyd, who hadn’t long come off the bench, followed him over. Halliwell sliced the goal attempt wide but made up for it moments later by speeding over England’s fourth try, Coyd adding the extras.

Rigby was next on the England scoresheet as they continued to build a sizeable lead. Coyd again converted.

Wales were close to scoring back on the half hour but Stephen Halsey couldn’t get on the end of a grubber. Instead, England raced upfield with Coyd racing through in the corner for his second.

But England had the last say of the first half as Coyd completed his hat-trick and then got a fourth in fantastic style as he just beat Trigg-Turner to the ball to score as the half-time hooter went. Collins converted both to England a 42-10 lead at the break.

Wales started the second half identically to the first, with Trigg-Turner scoring, this one under the sticks, with Higgins converting.

From kick-off, Stephen Halsey, despite being under pressure, grounded in the corner. Higgins converted again.

England struck back on 48 minutes as Rigby sped under the posts to complete his hat-trick. Halliwell did likewise two minutes later. Collins converted both.

Rob Hawkins and Josh Butler soon added their names to the England scoresheet. Collins added both conversions before getting a try of his own, which he again converted to give England an unassailable 50-point lead.

Hawkins added two more to complete another England hat-trick with Collins again formidable with the fist and converting both.

Boardman notched the next try, to add to his earlier goal, before Seb Bechara also got his name onto the scoresheet with two quick tries, the latter bringing up England’s century. Collins added all three goals. 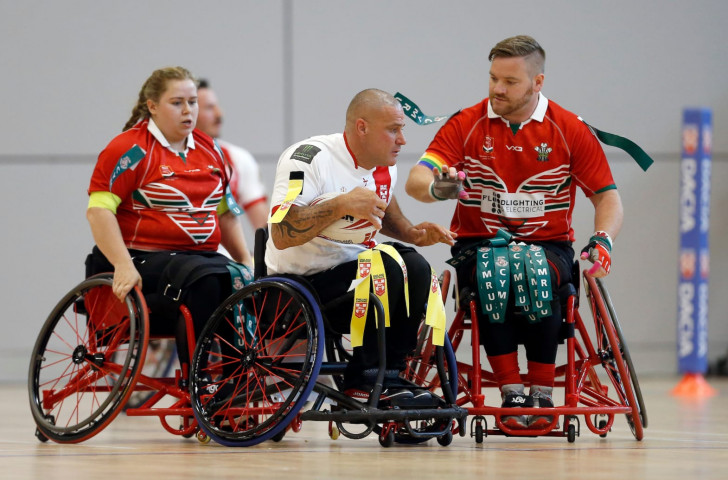