England Community Lions U20s were victorious in their Autumn test match, eventually running in ten tries on route to a 48-22 scoreline, but they were shocked in the first half by a young side containing several rugby league novices and there is plenty to build on for a Scotland side who beat Ireland last weekend.

The scene was set from their opening few plays when Ryan Crossley and Connor Terrill carried strongly for Scotland, and continued when England's James Ennis saw his attempted clearance kick charged down by Mason Cullen who followed through to collect the ball and dash over the line. Max Anderson-Moore converted and the good start for the visitors continued when Ben Jardine challenged Elliott Stockdale and Scotland won a further set of possession. Warren Paladino drove for the line and although his progress was stopped, Cullen forced his way in from the next play.

Although Anderson-Moore couldn't goal, Scotland deservedly led 10-0 after 12 minutes and the Lions shuffled their team with the introduction of Jonny Openshaw and Connor Grainey to the field.

James Ennis angled kick towards Sean Taylor which he was unable to take. Aaron Turnbull helped set the position before Openshaw and Matthew Ellis linked to find Ennis and he angled cross field and drifted between two defenders for a 17th minute reply.

Bailey O'Connor missed the conversion attempt to leave the score 4-10 after 17 minutes.

It took the Lions a further nine minutes to wrestle authority of the game with Cameron Young working dummy half well for Scotland, ably supported by Will Hadwen and Dylan Sykes.

Openshaw was proving difficult to handle for the visitors and it was his sprightly play and distribution that led to Charlie McCurrie opening his account in the 26th minute. Tom O'Loughlin couldn't convert.

Pressure was building against Scotland who conceded a drop out. Grainey and Will Ennis powered forward before Openshaw pounced for four points to the left of the posts. Once again O'Loughlin couldn't goal, but the Lions led for the first time 12-10.

Just before half-time the hosts extended their advantage with a fourth try. Somehow Grainey was denied but a looping pass left from Openshaw found space and Frankie Gibson and he finished well at the corner. Unfortunately for him, Logan Simpson couldn't goal, but England Community Lions had fought back well to lead by six points at half-time.

The new half brought another good start from Scotland with Terrill driving close only to see Paladino unable to take a dipping pass on the next play. Kick pressure on Anderson-Moore saw his kick simply collected by Simpson whose 30 metre return set the platform and when he was stopped a couple of tackles later near the line, Openshaw fed McCurrie who was unstoppable from close range.

Openshaw took over kicking duties but couldn't goal and it remained 20-10. The Lions went on the attack during their next possession with halfbacks James Ennis and Will Scrimshaw moving play and although it resulted in a difficult bouncing ball, Bailey O'Connor collected and ghosted left before hitting pace down the touchline to fly to the line. Openshaw added the first goal of the game for England to make it 26-10.

To their credit Scotland responded brilliantly. Crossley used his power, pace and footwork to burst through the middle and Anderson-Moore sped to the line and tagged on the extras for 26-16 after 58 minutes.

James Ennis saw a try ruled out with someone offside in the build up in the 62nd minute before the telling contribution. Once again it came from Openshaw when he supported James Ennis and Turnbull in the 65th minute. He also goaled to make it 32-16.

The final ten minutes saw Scotland fade and the Lions took advantage with Jack Stephenson ploughing through before McCurrie emphatically claimed his hat-trick from Josh Milne's pass. Two more Openshaw goals hoisted the score to 44-16 before Terrill was rewarded for his non-stop display with a try of his own. Anderson-Moore goaled but there was one more score to come from the Lions. Matty Ellis and Scrimshaw switched play left and the long striding McCurrie finished wide out for his fourth try. Bailey O'Connor couldn't improve but the Lions were well worth their 32 point second half which sets them up for a trip to Ireland whilst also acknowledging how much the young Scotland side also contributed to the game. 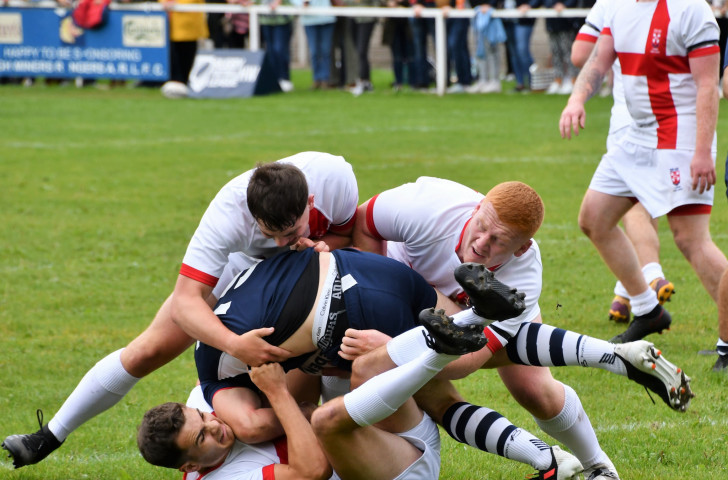