In cold and wet conditions, Serbia gained promotion from  European Championship B after defeating Ukraine 54-18 at the FK Heroj Stadium in Belgrade, taking their winning record over their Eastern European rivals to four games.

Playing expansive rugby despite the weather, winger Rajko Trifunovic and centre Vladimir Milutinovic both claimed hat tricks for the hosts who ran in ten tries in all and were presented with their medals and trophy by visiting lifetime honorary president of Serbian RL John Risman on his 77th birthday, their exploits featuring on national television news.

“It is a massive result for us and the team showed pride in their jersey,” said Serbia head coach Darren Fisher, in his first tournament with the nation. “We delivered our game plan very well and it’s good to see the skills of all the domestic players, they should be proud of those roots.”

Red Star’s Trifunovic opened the scoring with two almost identical unconverted tries out wide despite the driving rain, Vladislav Dedic then sending in brother Vojislav at the posts; Dzavid Jasari with the first of his seven goals.

Milutinovic posted his first and Stevan Stevanovic was next across to build a 24-point lead but Marko Jankovic was put on report and that galvanized Ukraine, full back Anatolii Hrankovskyi with two tries in three minutes - both converted by skipper Oleksandr Skorbach - Jasari with a home penalty after Ukraine sent a drop out dead in the swirling wind, to make it 26-12 at half time.

Milutinovic’s second touchdown came five minutes after the break from a Vladislav Dedic 40/20, Trifunovic completing his treble before Milutinovic did likewise to secure the spoils, Vitalii Puchkov placed on report for an alleged late tackle in the build up to the latter try.

With the weather improving, Oleksandr Shcherbyna’s solo effort was consolation for Ukraine, sandwiching tries by Milos Zogovic and Stefan Arsic for the Serbs.

URLF president, Artur Martyrosian, commented: “We were expecting a good game from Serbia having watched their match with Russia and the conditions suited the size of their pack. Unfortunately our defence was unable to manage against their momentum and they were able take advantage and make a lot of metres in the game.” 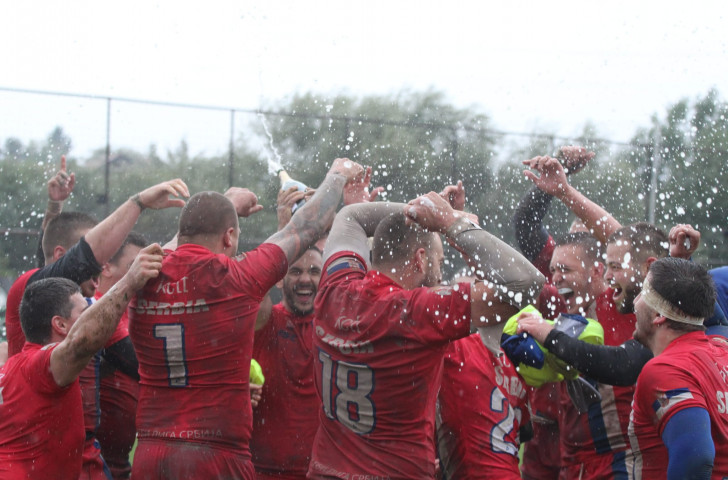