A try from Ryan Wood with four minutes left on the clock broke Welsh hearts in their first ever match at U17 level.

England won the encounter 16-10, but there was very little between the sides in an exciting contest played in good spirits throughout.

It was a battle royale throughout the game with two very well drilled defences. Wales have an official link with Salford Red Devils and this excellent performance from many individuals will certainly give their scouts a lot to look at.

After some good defending by Wales in the first ten minutes, they took the lead through a good run and break through by Harri Ackerman. Billy Walkley couldn’t convert.

England levelled on 26 minutes after Jay Richards twisted and turned to get past the Wales line and ground. Connor Gannon’s goal attempt was swept past the posts by the famous Bae Colwyn wind.

Wales looked to regain their lead, but tough English defence continued to keep them out and the scores were still level at 4-4 at the break.

England struck first in the second half after Evan Stephenson sold a dummy and scored. Gannon converted.

Wales replied on 54 minutes after Scott Pritchard leaped onto a grubber kick to score under the posts. Walkely converted to level the scores up at 10-10.

But it was England who won though after skipper Ryan Wood showed his skill be running through the Welsh defence to score under the posts. Gannon easily converted.

Both sides could have scored again in the last few minutes but, as they had been pretty much throughout the encounter, defences ruled. 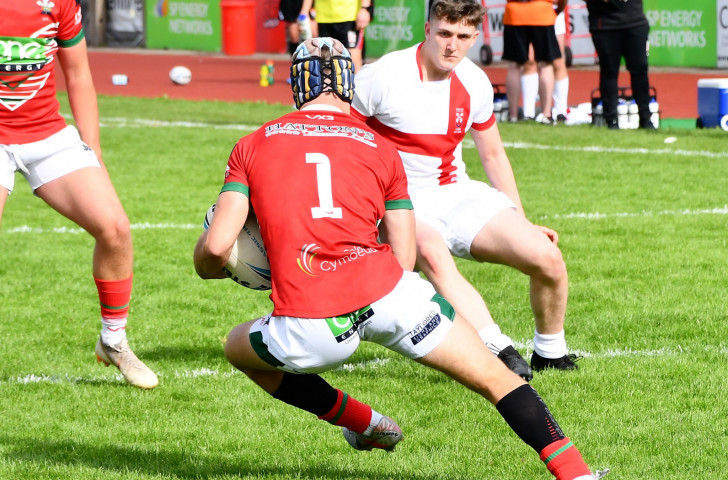