England were made to work hard for their first win under new coach Shaun Wane against France in Perpignan.

Liam Farrell, Tom Davies, Tommy Makinson and John Bateman all scored as a dominant England built a 20-0 lead over a struggling France by half-time.

Corentin Le Cam and Justin Sangare then crossed for France, with Makinson and Bateman getting their second tries.

The pandemic has disrupted England's international plans and they play only three more matches before the delayed World Cup gets under way next year.

As well as the showpiece international event being pushed back, England's Ashes series against Australia scheduled for last autumn was cancelled, so this was their first victory since beating New Zealand in November 2018.

Wane handed debuts to eight players for a much-changed team and Wigan's Bateman was given the captaincy in place of injured Man of Steel Sam Tomkins.

The head coach will be pleased at the quick-fire start his side made but will have concerns about the number of errors that crept into their game as they lost control of the game in the second half as France sensed a comeback.

The visitors gave a warning of their threat as early as the second minute through a measured Jordan Abdull kick which caused the France backline problems and they opened the scoring two minutes later as Wigan second row Farrell spun away from a challenge to score.

On nine minutes, Catalans Dragons winger Davies showed sublime athleticism by diving and squeezing over in the corner on his home ground.

The hosts were all over the place at the back and spaces opened up for St Helens winger Makinson and Wigan forward Bateman to go over unchallenged inside the opening 20 minutes.

The French team had consisted entirely of Catalans and Toulouse players until a late call-up for Morgan Escare and the Salford winger thought he had got on the scoreboard but his effort was ruled out as his boot had drifted into touch.

But they improved significantly in the second period and Le Cam's lovely dummy and step allowed the hosts to grab their first points of the game and Mark Kheirallah's try was chalked off.

Jonny Lomax was sent to the sin-bin for the final 10 minutes and France capitalised with Sangare bulldozing over, but efforts either side of that score from Makinson and Bateman put gloss on the result. 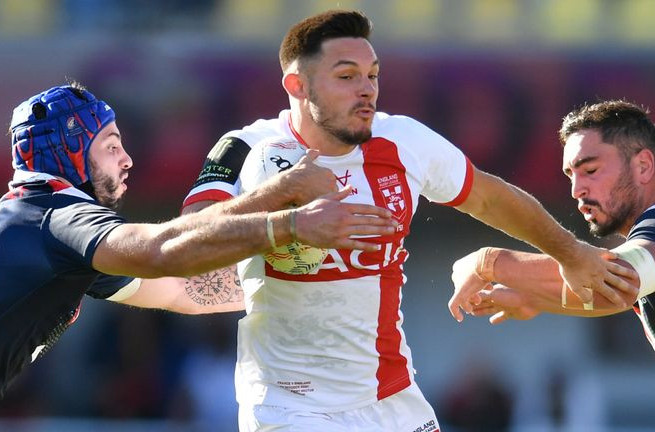