Wales outscored Ireland in try-scoring in their first ever home test ranked women’s international, but failed to convert any of their six tries, giving the Irish a 26-24 win.

It was an entertaining encounter that enthralled the crowd throughout but the end result left Wales head coach Tom Brindle disappointed.

“We frustrated ourselves and we were our own worst enemies for a large portion of the game,” he said. “We’ll learn a lot from this game. Generally women’s rugby league in Wales is healthy, we’ve just got a lot to do.”

Wales took the lead on nine minutes as Lowri Norkett made a strong run down the wing to score in the corner. Ffion Lewis missed the kick.

Ireland should have had a try back from their next attack, but good defence forced Ray Lawless into dropping the ball as she was going for the line. The same then happened to Storm Cobain a couple of minutes later as the Irish pressed for an equaliser.

They finally got over on 22 minutes when Clodagh Dunne, one of eight players from the Dublin City Exiles club, dived through to have the honour of getting Ireland women's first ever international points. Pip Birchall failed to convert.

Wales regained the advantage six minutes later after Seren Gough-Walters set up Eleri Michael to go over in the corner, with Lewis again not able to add the extras.

But Ireland took the lead five minutes before the break. Bettie Lambert latched onto the end of a Syphonia Pua grubber. Pua converted to put the Irish 10-8 up at half-time.

Ireland extended their lead in controversial fashion just after the break. The tackle looked to have been complete on Irish captain Stacey Greenwood, but she was allowed to play on and get up and score. Pua converted to put the score onto 16-8.

Wales soon hit back. Lewis took advantage of a quick tap to dive in and score, failing to convert her own try.

However an error in the Welsh defence allowed Ireland to extend their lead again. From the result set, Storm Corbain ran through for her side's fourth try of the day. Pua missed the kick.

They could have extended their lead further when Leanne Burnell was pulled into touch by Roisin Crowe on her own ten metre line, but a dropped ball prevented a further try.

Wales charged upfield and won a repeat set, leading to Lewis going in under the sticks for her second try of the half. Surprisingly she didn't convert her own score, her kick hitting the post.

Lewis was looking for a hat-trick. This time it was Crowe who was dragged into touch by multiple Welsh players and from the resulting set, Lewis tried to weave her way through the Irish backline again, this time though being held back a metre or two from the try-line.

It was Ireland who struck next. A well-worked set culminated in Alex McGuinness diving over before converting herself to give the girls in green a 10-point lead.

However with five minutes remaining, Wales won a repeat set and didn't waste their chance. Norkett forced her way through for her second try with Lewis again unable to convert.

Lewis completed her hat-trick in the final minute, scoring in the corner. Kathryn Salter took over kicking duties but couldn't convert from touch, leading to Irish celebrations.

John Whalley, head coach of Ireland “For our first game, we dug deep, it was really tough but we got through it in the end and it was a great Test match. We just needed to concentrate on our own performance and we certainly did that, it was a gritty second half and Stacey Greenwood led us round really well. Pip Birchall was a machine but it was a massive effort from everyone. We’ll regroup and hopefully get some warm up fixtures towards the World Cup.” 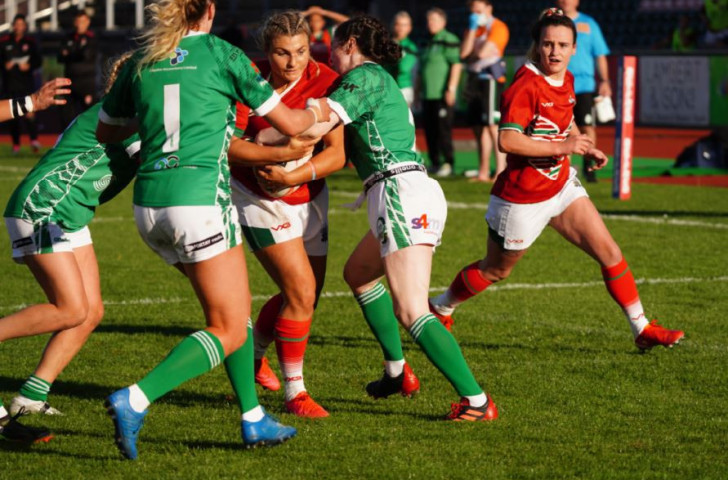