England captain Emily Rudge marked her record-breaking 24th appearance for her country with two tries in a powerful 40-4 win against France in Perpignan.

The 29-year-old second-row touched down once in each half, and also laid on a spectacular score for her St Helens captain Jodie Cunningham, as Craig Richards’ team eventually cut loose against a brave home team who also offered plenty of reasons for optimism ahead of the World Cup in England next autumn.

“Emily is a great leader for us on and off the field,” said Cunningham afterwards. “Breaking the record for England appearances is special, and it’s brilliant that she marked it with two more tries. It’s a great way to end the year, and gives us more to build on for the World Cup next year.”

It was England’s second big win of the year after they beat Wales 60-0 in June, with Rudge also scoring two tries on that occasion to give her four in two internationals in 2021, and eight in her last four England appearances, after she scored four in the first Test in Papua New Guinea in 2019.

It took England until the 26th minute to open the scoring as Amy Hardcastle surged over for her 15th try in 19 international appearances, but they extended that lead to 16-0 at half-time with further scores from Paige Travis and Rudge’s first.

Then Cunningham exchanged passes with Rudge to stride over from 40 metres to provide the perfect start to the second half, although that was followed by a period of France pressure which forced England to show their defensive qualities.

Their line held intact, and after Rudge pounced for her second, further tries followed from the St Helens hooker Tara Jones and the Leeds wing Caitlin Beevers.

Castleford’s Tara-Jane Stanley kicked five goals, and the Saints scrum half Beth Stott landed one, but France claimed a late try which their efforts deserved through Melanie Bianchini. 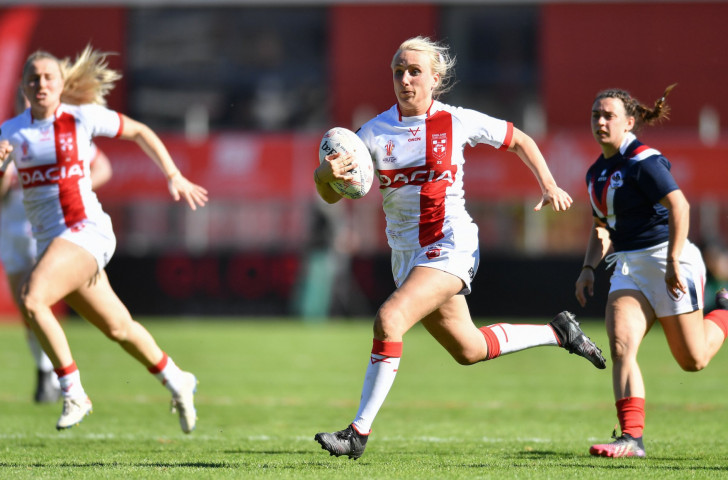