Sweden recorded a fantastic come-back in their first ever international rugby league match on Saturday. The Swedes looked dead and buried when Norway went over for their fourth try in the 55th minute to give them a 6-20 lead. However, Sweden threw caution to the wind and scored three tries to record an historic draw.

The weather was perfect for international rugby league, and the crowd that showed up to watch this unique spectacle were not disappointed. It was the home team who took an early lead. Sweden had run their first five sets into a well organized Norwegian defence to little avail. An opportunistic kick by Robert Tabell was chased by Robin Larsson. The Norwegian full-back was unable to cleanly catch the ball and Larsson was able to ground it. After consultation with his touch judge, the referee (none other than former South African captain Jamie Bloem) awarded the first ever Swedish try and Robin Larsson went into the history books. The score was converted by Tabell to give Sweden a shock 6 - 0 lead.

It didn't take Norway long to get back into the match. Both teams were tackling with real intensity but Norway seemed to make more yards with their possession, taking advantage of Sweden's relative inexperience. After a few phases close to the line, Norway crashed over for their first score.

Sweden tried to get back into the game, but they were finding it hard to get out of first gear. Hard runners like Cormac O'Brien, Johannes Kempe and Alexander Eliasson were being hit hard and were finding it difficult to make good yardage. The Norwegians had trained well for this match and it showed.

The second and third Norwegian tries were the result of some poor tackling by Sweden. The home team were releasing tacklers earlier then they should and this was giving Norway good fast possession that they could take advantage of. With one of the tries converted, Norway went into the break 6-16 ahead. The score-line was a reflection on the match so far. Sweden's game plan was not working, and it was decided that they needed to play a more expansive game in the second half.

It was Norway who struck first in the second half. A try from their winger in the corner making it 6 - 20. There was a real sense that this game could turn into a rout, but Sweden were not about to let that happen. Douglas Lidberg introduced strong running to the match and kept the Norwegians on their toes. As well as this, some more expansive rugby led by Shane Kakau and Kristoffer Nygård added a new edge to Sweden. It was Robin Larsson who started the comeback. He broke through several tackles to crash over for the second score.

With about 5 minutes to play, Sweden were camped on the Norwegian line. The ball was spread wide, but the pass didn't go to hand. However, Alex Eliasson scooped up the ball and went over in the corner. The score was now 16 - 20, with only minutes to play.

Both sides turned over possession needlessly in the remaining minutes, but a break-out from captain Martin Johansson got Sweden deep into the Norwegian half. Some big runs from Lidberg and Matz Jansson gave Sweden hope. In the 5th phase, Sweden spread the ball out to the massive Johannes Kempe. Kempe managed to fight off two Norwegian defenders and stretch to the line for a try in the last play of the game. The conversion was missed meaning that the match ended in a 20 - 20 draw. It is a result that Sweden can be extremely happy with.

The match is a testament to the hard work that has been done to promote the game in both Sweden and Norway. We hope that this will become a regular fixture and that both teams can progress further in European competition. 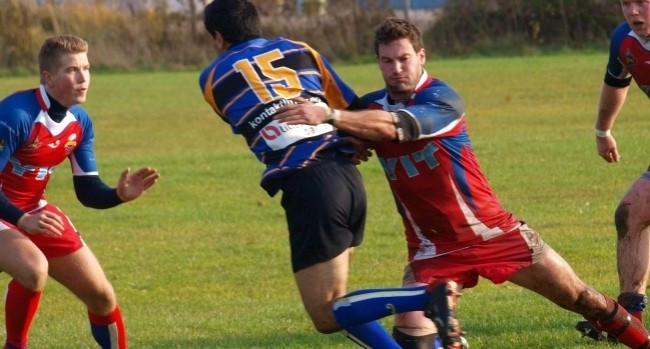