Jake Maizen’s hat-trick helped Italy get their World Cup campaign off to a flying start with a well deserved 28-4 win over Scotland at Kingston Park.

Tries for Luke Polselli and Dean Parata gave Leo Epifania’s men a 12-0 cushion at the break but it could have been more with two gilt-edged chances squandered as Scotland failed to capitalise on several repeat sets.

Maizen crossed for two in five minutes on the left wing at the start of the second half to take the sting out of the Bravehearts before completing his hat-trick with a long-distance stunner.

Lachlan Walmsley’s try prevented Scotland from finishing scoreless but this inspired display will give the Italians real hope of upsetting Fiji at the same venue next Saturday.

Both sides started with plenty of intensity but struggled to complete early on before Scotland’s Matty Russell thought he had scored the first try of the afternoon, only for a knock-on in the build-up to be spotted following a lengthy video review.

And it was Italy who broke the deadlock after ten minutes with a great finish when full-back Polselli got to Radean Robinson’s grubber kick in the nick of time to dot down.

Undeterred, Scotland grabbed the ascendancy as Italy repeatedly infringed, Ryan Brierley’s floated pass finding Walmsley who was stopped just short of the line before the ball was illegally stripped out of his grasp.

Liam Hood took advantage of a quick play the ball to collect his own grubber but dummied instead of passing to Russell who looked to have a clear run to the line.

And Italy made Scotland pay for failing to convert their pressure into points as Hood’s opposite man Parata scurried over from dummy-half, Jack Campagnolo’s second conversion stretching the lead to 12-0.

Campagnolo’s boot continued to trouble the Scots in open play too, Brierley struggling to get to grips with a towering spiral bomb.

Then it was Italy’s turn to bomb chances as they were first denied by Walmsley’s outstretched hand before wing Maizen fumbled with the try line at his mercy, although centre Daniel Atkinson would surely have scored himself if he had held onto the ball.

Captain Dale Ferguson had been called off the bench to add impetus by Scotland coach Nathan Graham but it wasn’t long before he was trudging back having been sin-binned after his studs made contact with Atkinson’s calf in a tackle.

Scotland finally got their offload game firing, NRL star Euan Aitken finding Bayley Liu out the back door but the centre lost the ball a metre out in the final action of the half.

Italy continued where they left off after the break, Maizen finally getting on the scoresheet by dragging himself over in the corner with Campagnolo adding the extras from the touchline to make it 18-0 just before Scotland returned to a full complement.

It made no difference, however, as only Brierley’s try-saving tackle stopped Atkinson in full flow.

But the reprieve was short-lived as smart work on the short side from Polselli allowed Maizen to catch his opposite man Walmsley napping and dive in for his second.

And he completed his hat-trick late on after a lovely arcing run took him past the defence and he steamed home from 80 metres out.

There was plenty of support for Scotland in the crowd of 6,206 and they finally had something to celebrate when Aitken’s offload found Walmsley who jinked inside for a consolation score late on. 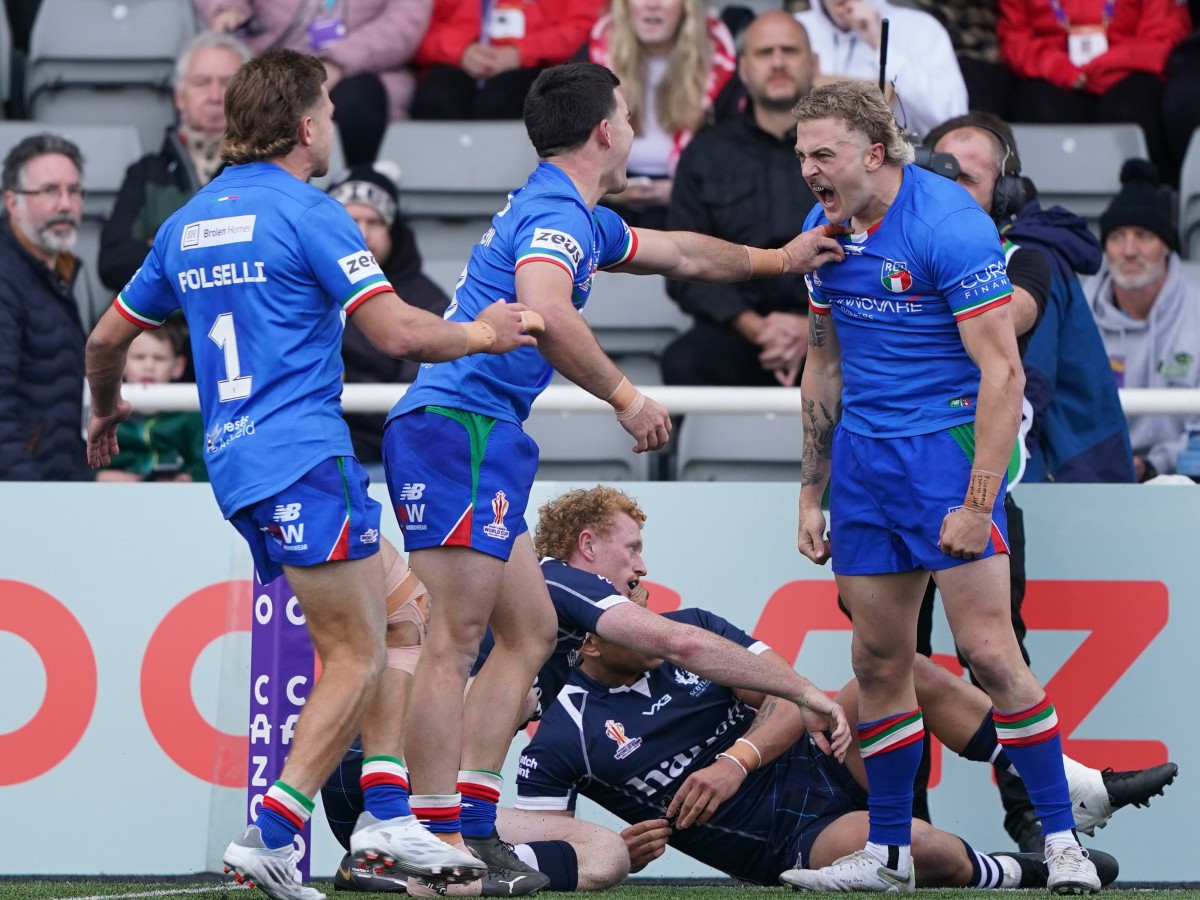