Wales will meet England in the Wheelchair Rugby League World Cup semi-finals after a 70-36 victory over Scotland in Sheffield.

It was Wales' second Group B win after they beat the USA, while Scotland lost for the third time at the World Cup despite four tries from Dan Grant.

The Welsh justified their favourites' tag in this decisive group game to set up Sunday's meeting with England, though they will start that tie as underdogs.

Wales took control from the outset against Scotland, with Trigg-Turner and Gary Preece going over in the opening six minutes.

Dan Grant scored the first of his three tries to give Scotland hope, but Trigg-Turner and Higgins quickly replied for Wales.

John Willans and Mike Mellon scored quickfire tries to give Scotland hope of getting back into the contest, but Martin Lane and Harry Jones crossed before the break to put Wales in control despite Grant's score just before the hooter.

Jones stretched Wales' lead right at the start of the second half before player-of-the-match Higgins - who also managed nine goals - scored twice in three minutes to put his side in complete control.

Swift hands then saw Trigg-Turner go over in the corner before Scotland scored tries through Mellon and Grant.

But Wales were soon back on the offensive, with Higgins and Lane crossing from close range before Grant's fourth try for Scotland right at the end.

Wales' game against England will also be in Sheffield, as will the other semi-final between France and Australia.

Wales' Andrew Higgins said: "I am so happy for the guys and the girls on the team. To get into the semi-final is an unreal result.

"We were taking nothing for granted. I think USA showed that when they beat Scotland the other day.

"We did our analysis and we knew we had to have our game-plan. I think we mastered our game-plan and we got the result at the end of it.

"I can't wait [for the semi-finals]. I don't think we expected it as a team. It's going to be amazing, so roll on Sunday."

Scotland head coach Mark Roughsedge said: "It's been a real story of our competition - we are our own worst enemy, aren't we? We need to cut out our errors.

"But I honestly believe we are not that far away. I think we are a year or two away from being really competitive. I am confident that at the next World Cup we are going to be in and around those final stages.

"We need to really grow the game across Scotland. We need to create new clubs and hopefully our own competition where we can feed into the national squad." 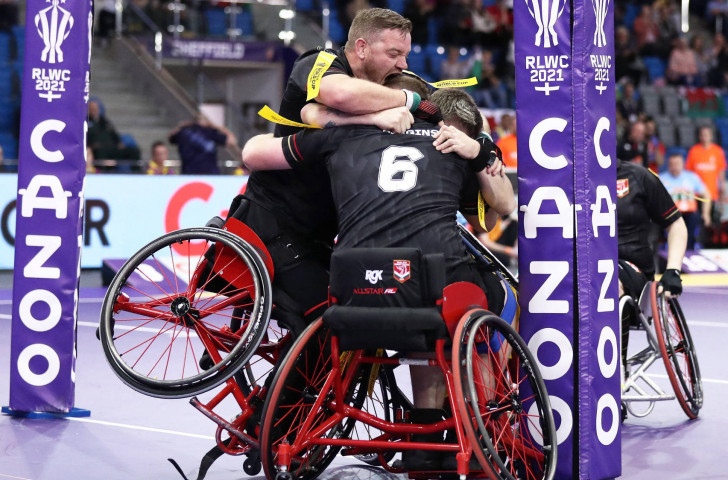