England continued their preparations for this autumn's home World Cup with a hard-fought 18-4 win over the Combined Nations All Stars in Warrington.

Shaun Wane's side gained revenge after losing to the All Stars 12 months ago.

Jake Wardle scored just 11 minutes into his England debut after latching on to Sam Tomkins' short pass and it was 12-0 when George Williams raced over.

John Bateman bundled over in the second half, while Ken Sio grabbed a fine consolation try for the All Stars.

This was England's penultimate warm-up game before hosting the World Cup. They face Fiji in the fortnight before opening the tournament on 15 October against Samoa in Newcastle.

England lost the corresponding fixture 26-24 in Wane's first game in charge and although they were given a stern test this time, they looked much more fluid in attack and solid in defence.

They were missing some players through injury, and those in the NRL were unavailable, so four debutants were named - St Helens trio Jack Welsby, Joe Batchelor and Matty Lees, as well as Wardle.

It was a perfect introduction to the international stage for the Huddersfield centre, collecting skipper Tomkins' perfectly-timed pass before holding off two defenders to go over.

Williams, playing on his home ground, was selected by his former Wigan boss Wane despite now being part of an under-performing Warrington side that languish in ninth place in Super League.

But the scrum-half repaid his coach's faith when he provided the support to Bateman's break for his side's second try.

Wigan's Bateman went from provider to scorer when he burst through and managed to touch down despite the attention of two defenders.

Rugby league legend Ellery Hanley was in charge of the All Stars and his side came close when Tomkins provided superb cover to thwart Kruise Leeming on the break.

But they did get on the scoresheet for a late consolation when Salford winger Sio dived over from captain Shaun Kenny-Dowall's pass. 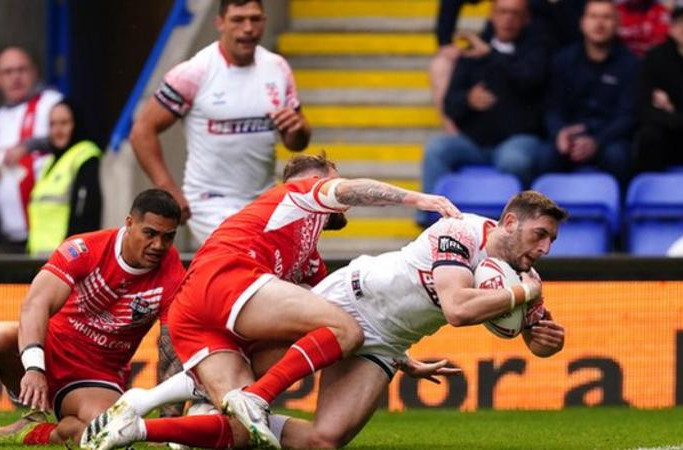