The 10th Annual Griffin Cup went home with the visitors Germany with spoils now shared 5-5 between them and this year’s hosts Netherlands.

It was a promising start for the men in orange as Arie-Tjerk Razoux Schultz powered through on 8 minutes, setting up an easy conversion for Laury Renac to add the extras.

But from then on in Germany dominated the first half, with Mawuli Améfia’s powerful run opening their account, barging through the line to touchdown. Shortly afterwards Ben White slinked in for try, slicing through the middle of the park, before an Adam Ryder double on the right edge increased the pressure on the home side, with Brad Billsborough on target with all four conversions and a drop-goal just before the half time hooter to further extend the lead at the break.

Things looked ominous when Germany were first to score in the second half, Niklas Hartwich diving in the left corner to complete a flowing move, but the conversion was too far out for Billsborough to add the extras.

Momentum shifted when Mike Prins plucked a long right ball out of the air to race in from 60 metres, a classic centre’s interception, giving Kees Kuijpers an easy shot on goal. Paul Kuijpers followed up shortly afterwards, taking Paul Dirkzwager’s short ball and dancing around the defence to crash through at the side of the posts, with Kees Kuijpers adding the extras.

The two sides slugged it out for the remaining 20 minutes, before Gideon van Kleij crossed for a further Dutch try in the right corner during which referee Misa Vakadranu deemed he had been fouled in the act of scoring, awarding a possible 8-point try to the Netherlands. Kees Kuijpers missed the conversion, but scored the following penalty under the posts, bringing Netherlands within 1 converted try of the visitors. The game finished with a flurry as Prins appear to have grounded Razoux Schultz’s kick, potentially setting up a match winning conversion, but after deliberation the score was ruled out by the officials and the Griffin Cup was Germany’s.

“It was unfortunate not to get a result today, but we can’t expect to win when we drop the amount of ball that we did” said Dave Hunter, Netherlands Head Coach.

“The Germans outplayed us in the first half and were too strong through the middle. But to our credit we came out positive in the second half and almost got win. Despite losing the game, our domestic boys will gain a lot of confidence knowing they now compete with players playing professionally overseas.”

Bod Doughton, Germany's Head Coach was pleased with the strides being made in Germany which complimented their win.

“Apart from the fact that we won, it was really pleasing to see the development that the domestic players have made since last year” he noted.

“There are still a lot of areas to work on but I am confident that our coaching staff will continue the great work we have all put in to improve these.” 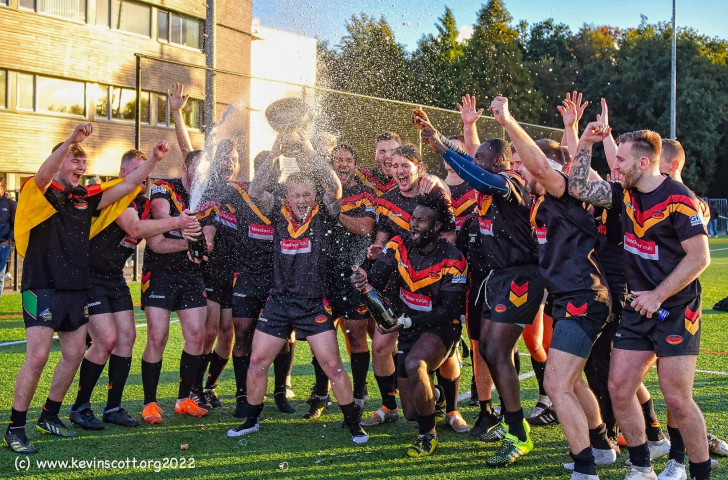