Talk of a return to the Rugby League World Cup realm immediately followed a dominant 82-0 victory by South Africa against Brazil on Sunday, June 5.

World Cup participants in 1995 and 2000, the South Africans scored in just the second minute against Brazil at Noosa, Australia, and rarely took their foot off the accelerator as they built on a 32-0 halftime lead.

In his post-game speech Rhinos captain Shane Gillham indicated eyes were on the 2025 World Cup in France, referencing the hard road back to the winner’s circle since he became involved in 2015.

“There’s a handful of us who have been here since 2015 and we’ve experienced being on the other side of scorelines like today,” Gillham said.

“What I would say to Brazil is to stick with it, it’s a wonderful game, and if you learn from today and bring the same physicality in the future, your time will come.”

They were a much more composed and confident side against Brazil in their latest performance, with their physical preparation clearly on display.

Mackay Cutters backrower Ethan Sweet was named the official player of the match, while outside backs Jason Cutler, Jean Charl-Smith, Byron Hutchison and Darren O’Donovan kept the scoreboard ticking over.

Brazil, although outclassed, fielded 14 players born in the South American nation itself and flew in seven players especially for the game, with six only granted visas two days before they were due to fly.

Their best chance to score came when hooker Simon De Araujo was held up over the line in the 25th minute when scores were 28-0, while Rio Sharks captain Fellipe Dittz was twice repelled by the Rhinos defence in the dying moments.

“Credit to South Africa for their professionalism and co-operation all throughout the build-up to today’s game and we wish them well for future endeavours,” Brazil team manager Robert Burgin said.

“Despite the heavy loss, the effort never waned from our Carcarás players, and the tears and smiles at fulltime, and the passion in their voices right to the final tackle show how much this means.

“As a promotional exercise, the lead-up to today’s game has given massive exposure to the sport in Brazil and shown we are serious about development pathways.

“We had nine Australian-based players who are regular selections but weren’t available today.

“Instead, there was one boy in our squad today who finished high school just a few weeks ago in a small town in Minas Gerais, flew around the world, and is chasing the dream of being a professional rugby league player in the future.

“There are dreams inside every one of these players, and after the siren I can tell you the voices were of gratitude for the experience, not of discouragement.”

Burgin also reported that, despite the heavy loss on the field for Brazil, they had sold out of 75% of food items on the menu, merchandise sales were encouraging compared to other events, and the support given by home-away-from-home club Noosa Pirates had been nothing but outstanding. 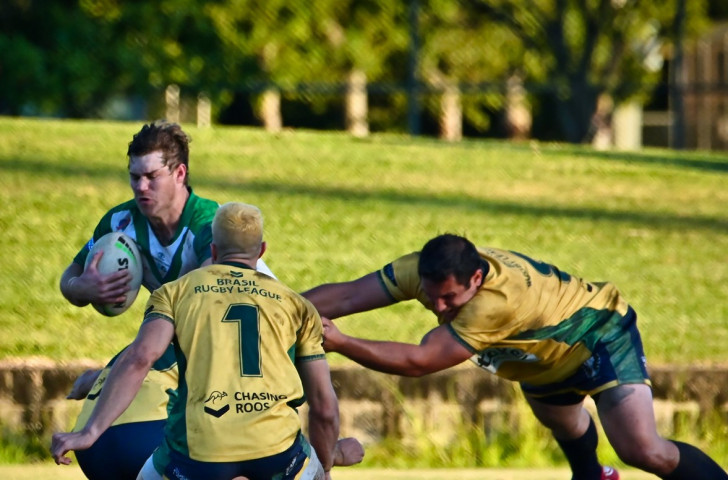