EUROPEAN CUP GAME 3
France stayed on course for a title decider with Wales next Saturday after overcoming dogged Scotland 26-12, in front of 7,150 fans in cold, wet Albi. Catalans Dragons stand off Tony Gigot was again the stand out performer, his sweeping 40 metre try from a scrum in the 33rd minute establishing a 10-0 half time lead for the Tricolours.

Chances were few in an attritional opening period spent predominantly in midfield, winger Frederic Vaccari having a touchdown disallowed after being rolled in to touch in the opening minutes but going over from Gigot's clever grubber soon after. Scotland, whose Cup hopes came to an end, gave away too many penalties and spilt cheap possession but were back in the contest three minutes after the break when Lee Paterson's clever short ball sent Alex Szostack powering through William Barthau, Danny Brough goaling to become the second highest points-scorer in Scotland rugby league history with 56.

From a drop out soon after, France re-established a ten point advantage, Kane Bentley's deft pass seeing substitute Sébastien Martins power over, Nicolas Munoz landing his second goal.
With the visiting defence solid, Vaccari was held up and then Munoz placed on report for lifting in the tackle and Neil Lowe was denied for the Scots as they finally secured some field position but were unable to turn it into points. And when rookie winger Dave Arnott fumbled a Gigot high ball, Munoz's flick sent Mickaël Simon to the posts to make it 22-6.

Steve McCormack's Scots gained deserved consolation with a second try when Sam Barlow crashed over from close range for his first for his country; Kane Bentley doing likewise for France's fifth try, six minutes from time to seal the win for Bobbie Goulding's men. 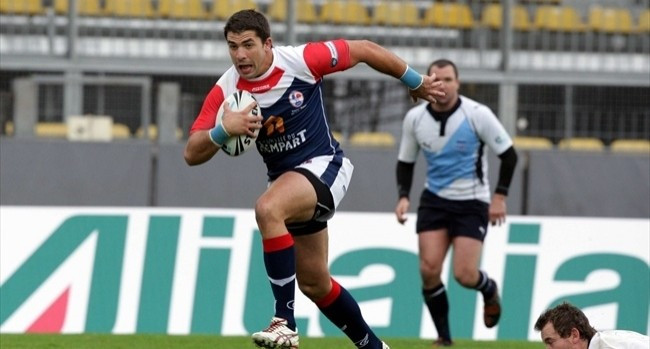