Italy took a firm grasp over the tightly condensed European Shield pack with an irresistible twelve-try rout of Germany in Piacenza.

“We can’t get too carried away,” said a clearly satisfied Italy coach, Paul Broadbent. “We reviewed the Serbia game, we fixed up the areas we weren’t good enough in against Serbia, and the guys really took on board the things we said we wanted to try and improve.”

Fully eleven try-scorers combined in a total team performance that blew the Germans away from the opening set of six, which ended in second row Davide Rancati’s try. That it was going to be a long day for the Germans, and one that was made that much more uncomfortable by the unforgiving Italian summer sun, was evident from the earliest exchanges. In the opening eleven minutes of the match Germany were starved of possession, incredibly playing the ball only once. In that time they were already 18-0 down as the Italians adroitly carved them open around the ruck.

When the Germans did manage to mount their first attack, a dropped ball led to debutant prop Nourou Bance racing 80-metres downfield, only to be brought down inches from the line after an outstanding chase by German winger Mawuli Amefia. An Italian forward pass on the next play saved Germany from further punishment.

Germany centre Nick Keinhorst closed the gap to 18-4 on 18 minutes but the Italians were too well drilled and motivated to allow the visitors back into the match, and three more tries in a lightning five-minute spell put the result beyond doubt. The third of these saw South Wales Scorpions lock Chris Vitalini put Remi Fontana through a gap on 29 minutes for the pick of Italy’s seven first-half tries. The half ended 42-4.

Stand-off Gert Peens bagged a total of 24-points, with a perfect ten goals from as many attempts, while his halfback partner, Remi Fontana chipped in with two goals and tries to cap an influential day in the midfield.

“We started really well which gave us a lot of confidence and it was a really credible performance,” continued Broadbent. “Tactically, we tried to move away from playing sideways and get them [Italian players] playing forward. We wanted them to use little short passes, and play at the line in numbers, and I think we did that brilliantly today.”

Downbeat Germany coach Dan Stocks was barely able to mask his frustration after the capitulation: “I’m disappointed, obviously, especially by the manner which we lost. The previous two games saw us play some really good rugby league and today we moved away from the plan and didn’t do what we were supposed to. Italy came out strongly, we didn’t touch the ball and we were up against it after going down 18-0.

“A few people questioned whether Germany could play at this level and said we’d lose by blow-out scores in every match. Yes, this was a big score, but we’ve won one and were competitive with Russia so overall I’m pretty happy with the way 2012 went and looking forward to getting back into the competition next year.”

Italy and Serbia both travel to Russia in September to complete the first half of the biennial competition. 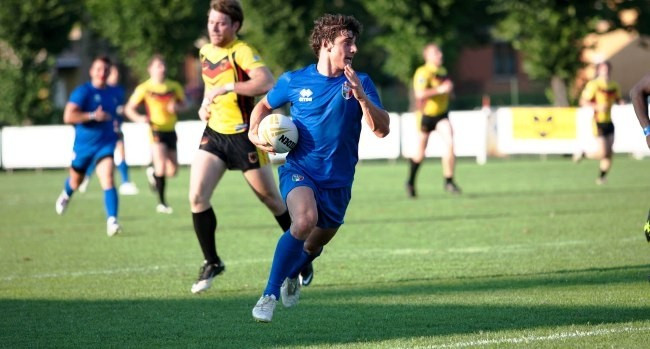