A 14-point winning margin saw Russia displace Italy at the top of the congested 2012/3 Rugby League European Shield table, the Bears coming from behind with a strong second half show.

They were superbly led by prop Sergey Konstantinov, the giant policeman dominating the midfield. “It was a great game, both sides played really well,” he said at the man of the match presentation. “Italy was a strong, honourable and fair opponent and their attack had us concerned quite a lot. We don’t get games like this in Russia all the time and we’d really like to have more matches like it.The critical moment was early in the second half when our pack began to neutralise theirs which allowed our backs some spaces on the edges,” he added.

The visitors led 12-6 at the break but lost hooker Mario Marcinczak with a cut eyelid towards the end of the first half which disrupted them. Coach Paul Broadbent commented, “I can’t fault the guys’ effort, they worked really hard but ran out of steam.  The Russians were really good; they kept coming and when they got a sniff they kept pushing and we cracked.

“Once we lost momentum we struggled. We made a long break, tried an offload, they recovered it and three plays later scored and we were behind from that point on. We’ve got ourselves to blame a little bit but it’s been a tough challenge and the lads have come over and given it a go.”

Italy took the lead in the 11th minute, Remi Fontana’s kick deflecting into the hands of Fabrizio Ciaurro for the opening try, Gert Peens goaling. The same combination set up the second touchdown on the half hour, Fontana’s short pass sending full back Ciaurro striding through, Peens again adding the extras. Russia responded just before the break, Maksim Suchkov with a raking run from deep which set the position for Sergey Gaponov to cut through from close in, Aleeksander Lysokon landing the first of four conversions to make it 12-6 at the break to the Azzurri.

In the 47th minute Italy increased their lead, debutant Dario Esposito powering over on the back of a penalty, Peens preserving his hundred per cent kicking record but from then it was all Russia. Konstantinov and Vadim Fedchuk made big in roads and Petr Botnarash claimed the first of his two tries, in the corner. A Vladimir Vlasyuk scoot freed Botnarash and he sent in Eduard Ososkov from 30 metres, the player/coach crossing again in the next set on the hour. Alexey Mikhailov stretched over to give the hosts breathing space and Botnarash completed the scoring in front of an enthusiastic crowd of over 300. 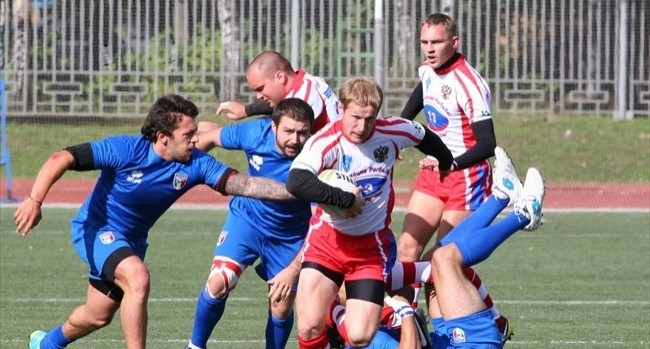