The 500-plus highly vocal crowd turned out in initially rainy conditions for the first visit by a Swedish team to Danish shores, with the Swedes hoping to overturn a heavy, home defeat (8-52) in Gothenburg last year.

As a great sign of future development of the game in Denmark, local junior schools played an often highly spirited game of ‘flag rugby’ as a pre-game warm-up for the crowd.

The traditionally slow-starting Danes registered a storming first set, which ended with a powerful, bursting run and try from forward Tom Hobbs.

This style of power running set the pattern of play for the day for both teams, with the greasy under-foot conditions not encouraging expansive passing play.

As the score line suggests, try scoring opportunities for the home team came at regular intervals, with four different Denmark XIII scorers registering braces as they built a 54-4 halftime advantage, Swedens sole try coming from vice captain Scott Edwards.
Ground conditions started to improve in the second half, with both teams started to move the ball out wide to take the pressure off the forwards.

As time went on, and with the points margin being so wide, the Danes allowed themselves to engage in more adventurous passing play – with the result that the Danish centres, Andreas Clippet-Jensen (a hat-trick of tries in four minutes) and Silas Mubanda, were able to create sufficient panic and space in the Sweden XIII defensive line to jointly cross the line six times in the second half.

Scrum half Viiga Lima stood out in a dominating team performance with four tries and a 100% conversion rate from six kicks.

Sweden XIII co-ordinator Scott Edwards was not too down beat after the match: "We were clearly up against a well organised Danish squad and our inexperience cost us on the day. We know biggest our weakness; you have to make your tackles. I believe the boys will have learnt a lot from this experience and now we need to prepare for Norway in Oslo later on in the year. Losing by such a big difference can be disheartening but I'm very proud of the team for sticking it out for 80 minutes." 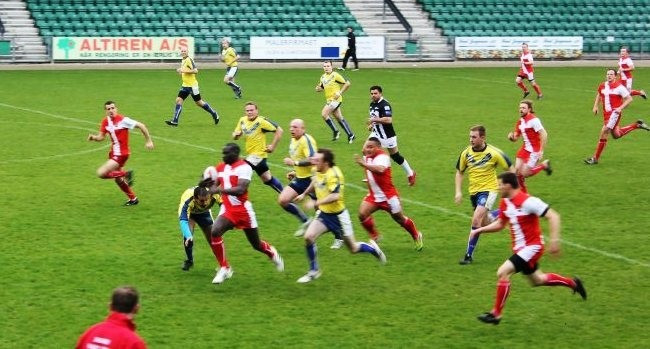