Russia maintained their unbeaten start to the competition with a testing win in rain-sodden Naro-Fominsk. Conditions were tough throughout with the game played in a relentless downpour, the Bears making the perfect start when Mikhail Nisiforov and Kiril Kosharin exchanged passes down the left on a 50 metre break, Kosharin sliding over in the first minute, Aleksandr Lysokon converting.

Both sides struggled to complete their sets with ambitious passes going to ground but the visitors fought their way back into the match through the strong, direct running of Dejan Lukenic and loose forward Stefan Nedeljkovic. Russia were the more physical in defence and the Serbians were dealt a blow in the 18th minute when impressive full back Milos Zogovic was forced from the field with a serous arm injury causing a re-shuffle. Seven minutes before the break they were back level, though, veteran scrum half Dalibor Vukanovic scooting over from eight metres and adding the conversion.

In a repeat of the first half, massive second rower Kosharin powered over out wide for his second try within two minutes of the re-start, Lysokon goaling and, on 56 minutes, Nisiforov again exploited the left hand side as he went in to make it 16-6 as concerted Russian pressure told. Straight after, Serbia thought they had scored when Milos Djurkovic stretched over the line but appeared to fumble the ball, his try disallowed despite Serbian protests.

The Bears secured the win eight minutes from time when excellent full back, prolific Dmitry Bratko crowned his third long break of the game with a try down the right. He had also been exceptional under the high ball in the testing conditions.

Russian coach Igor Ovchinnikov commented: “It was good to win such a close match against very tough opponents. All our preparations paid off, it was very difficult for both sides in the rain.”

Pictured: Dmitriy Bratko goes in for the clinching try. 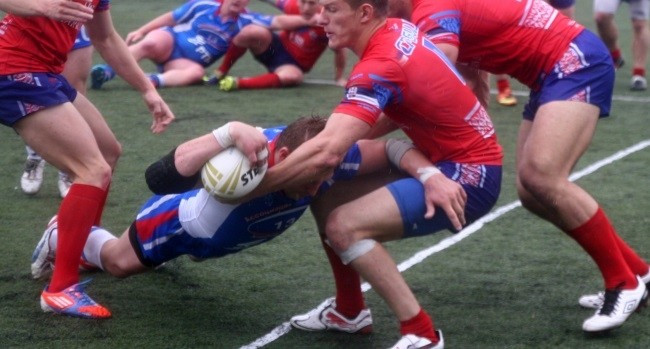