The President of Malta, H.E. Marie-Louise Coleiro Preca, watched as her national side were defeated by Greece, 32-18, in the opening fixture of European Championship C at the FC Melita Stadium near Pembroke. She was accompanied by Greek ambassador to Malta, Alexandros Rallis who saw hooker Liam Sue-Tin turn in a man of the match performance for the visitors.

He was instrumental in the opening score, latching on to a Michael Korkidas break and sending Nikolaos Kanellopoulos over, Sue-Tin goaling. Former Wakefield star Korkidas was the provider of the Greek second try for Terry Constantinou in the 12th minute, Sue-Tin again on target and Greece’s early dominance was confirmed when scrum half Michail Giorgas–Spanos scampered in, Sue-Tin’s goal giving them an 18-point cushion. Malta hit back on the half hour as their half backs gained more control, winger Ed Willis crossing and Sam Keep converting.

The hosts began the second period in much better form, their best, centre Malcolm Attard with the first of his two tries, Keep’s goal reducing the gap to six points. Malta were dealt a blow in the 50th minute when second rower Dragan Cerketa left the field with a knee injury and play was halted soon after when Giorgas-Spanos suffered concussion after a heavy collision.

The break for treatment seemed to suit the hosts as they drew level just after the hour through Attard and Keep’s third goal, delighting the around 300 fans. Pine Rivers rake Sue-Tin then took charge, his great break and pass sending in stand off Niokolaos Bosmos, Sue-Tin adding the goal and a penalty four minutes from time to establish a vital two score lead. Malta pressed in the closing stages but Korkidas completed the scoring with a long range touchdown, Sue-Tin keeping up his perfect kicking record. 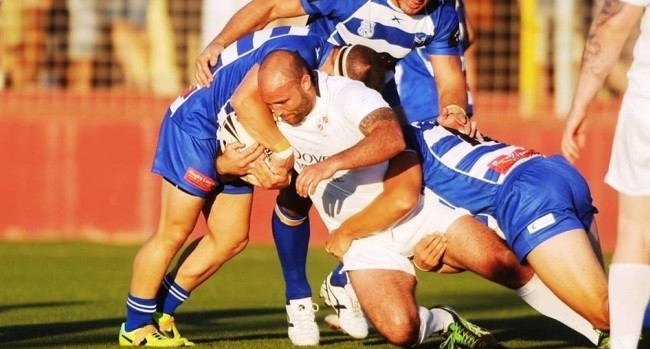