Former New Zealand Warrior Jordan Meads, now playing for Gateshead Thunder, was the star of the show with six tries in a side that featured 13 players from the domestic competition.

Loose forward Ioannis Rousoglou was the pick of them. “The amount of progress the local boys have made in a short space of time has been incredible,” said Greek National coach Steve Georgallis.

A crowd of 400 was on hand and it took two minutes for hosts to get on the scoreboard, Meads racing around Czech full back Otto Friedl.Meads added two more tries soon after, Liam Sue-Tin Kentrotis kicking both goals to give the hosts a 18-0 lead. Czech winger Vit Caslavska was tackled touch in-goal and it was left to skipper Petr Sedina to open their account when he burrowed over from dummy half.

Meads then took on the defence again to score his fourth try and home skipper Michael Korkidas showing plenty of strength to get the ball down adjacent to the posts, Sue-Tin Kentrotis adding the extras to maintain the point-a-minute barrage approaching the half hour.

Five minutes later, Lucas Kristof crossed for the visitors but Pyrgos-raised Nikolaos Kannellopoulos extended the lead after the Greeks spread the ball wide to make it 34-12 at the break.

It took just four minutes of the second half for Meads to add to his tally but the biggest cheer came in the 53rd minute when, from his own half, Korkidas split the defence and sent centre Ioannis Valassas on a good run.

With the cover getting to him, Valassas got a great ball away to Giorgin Syti and the full-back was able to race clear to score much to the delight of the crowd.

Caslavska claimed a try in the corner to make the score 46-16 after an hour and fancy footwork from Meads saw him register try number six.

Arfaras got a great ball away for Nikolaos Bosmos to score the twelfth Greek try and he also posted the final goal. 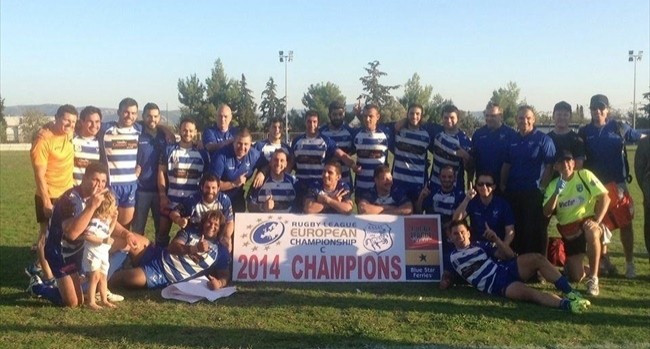