The result of the first match in the 2 game series between the Czech Republic and Latvia Youth teams was a 20-6 victory to the home side in Vrchlabi. The tightly contested game was immensely physical and remained scoreless for the first 25 minutes as both teams attacked with vigour and defended their own lines tenaciously.

The deadlock was finally broken when a scrum win from the Czechs, ten metres out from the tryline, allowed halfback, Jindra Jirotka, to scrabble forward and stretch out for the first try of the match directly under the posts; the conversion from captain Patrik Koliska giving Czech a 6-0 lead. Both teams continued to revel in the physicality of the contest, neither looking on the point of gaining ascendency until inexperience from the visitors resulted in one of their players striking the ball wildly rather than diving on it when the Czechs put through a regulation sixth tackle kick; the result was that the ball popped into the hands of hard-working hooker, Jindra Pinc, who strolled through some stunned defence to score the day’s second try. The conversion of that try established the Czechs 12-0 halftime lead, a scoreline that was not a particularly accurate reflection of the competitiveness of the match up until that point.

The Latvians needed to convert their effectiveness in attack into points as quickly as possible in the second half, and they duly did so when captain, Alexandrs Kolodonidis, put through a speculative kick early in the tackle count as soon as the visitors gained possession. A mistake from the Czech fullback gifted the ball to Latvia’s Edgars Alainis, the hooker scoring the try and Kolodonidis converting.

With the score at 12-6, the Czech team were awarded a penalty 30 metres out, and to the side of the posts. Opting for the kick attempt, Koliska gave his team some breathing space when he drove the ball through the posts.  It was then left to local Mad Squirrels rookie, Lukas Mejvold, to consolidate the lead when he was on the end of some quick hands along the backline which resulted in the game’s best try. Koliska converted and 20-6 was the final scoreline.

For the Czechs, Milan Pesout’s wholehearted 80 minute second-rower’s performance in both attack and defence was worthy of Man of the Match status, and he was ably supported by all of his forward partners, Pinc and Jonas Hagl particularly effective. For the Latvians, prop Endjis Vicivskis was outstanding in his drives forward, while second rower Roberts Kakis fully imposed himself on the game, centre Martins Rauzins was a constant threat with ball in hand, and captain Kolodonidis marshalled his troops throughout, with an impressive passing and kicking game, despite suffering a leg injury which clearly restricted his mobility throughout the second half.

The scene is now set for the second and final game in the series, the experience gained by the tourists in this first game against a Czech team made up predominantly of teenagers who already have various levels of experience in the senior domestic championships, certain to ensure an equally enthralling match-up, which will again be played at the home of the Vrchlabi Mad Squirrels club.

Pictured: Jindra Jirotka opens the scoring for the Czechs. 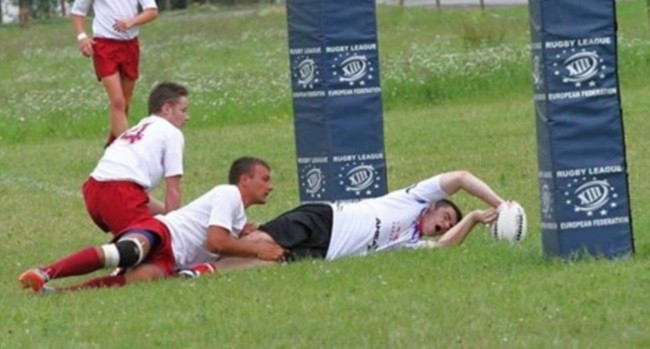