The result of the second match between the Czech Republic and Latvia’s youth teams resulted in a very similar score to Game 1 played two evenings before, but was notable for the fact the both team’s performances were a further improvement on the first match-up.

Similarly to Game 1, Game 2 of the series was incredibly physical, with both teams showing a commitment to attack and defend with passion, while also exercising a range of impressive core skills in the process. Several thunderous hits in defence from the biggest man on the field, Latvian 2nd rower Dainis Turkins, in the early stages set the tone for the match, and it took a deal of resilience from the Czech forwards to maintain both possession in attack, and their overall composure. As with the first game, the first quarter of the match remained scoreless as both teams played out their sets with predominantly hard-running, mistake-free attacking rugby league. Similarly to the first game also, 2 tries from the Czechs in the second period of the 1st half gave them a misleadingly comfortable half-time lead of 12-0.

In the 2nd half, the pressure and competitiveness of the game told when Czech captain, & Player of the Series, Patrik Koliska, elected to take a shot at goal rather than attack the Latvian line, when awarded a penalty inside the opposition quarter. Koliska goaled himself, thus giving the home team a degree of breathing space, before the Czechs scored an unconverted try through Jakub Sulc, and Koliska then elected to take a second penalty goal opportunity to give them a 20-0 lead with an hour of the game played. The Latvians though, as had been the case throughout the series, refused to submit, and on the back of some fiery play ran in the best try of the game through quick hands along the backline to give space to their hard-running utility back, Aldis Ivanovs, to slice through to score.

Tempers flared somewhat over the last period of the game as both teams niggled, but referee Jaroslav Bzoch kept a firm hand, with support from linesmen Jarda Zizka & Ashley Brown. Just as his brother, Endijs, had led his pack forward in Game 1, in Game 2 it was Helvijs Visivskis, who steadied things for his team as he continually plowed the ball forward, while Tomas Sidlik and Jonas Hager put in whole-hearted efforts for the Czechs, and Game 1 star, Milan Pesout, was again a rock for the Czechs, until letting himself down in the final minutes with a show of petulance that ensured he finished the game in the sin-bin. 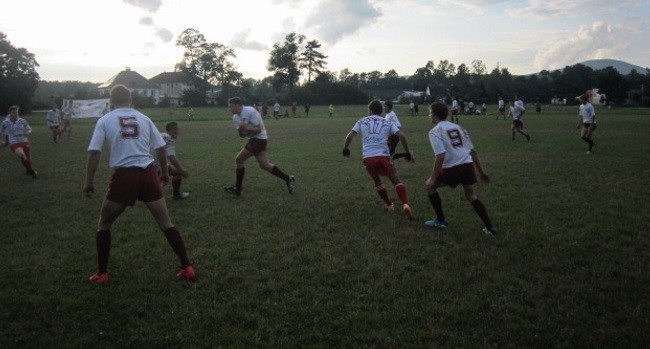