Denmark overcame initial tough Swedish resistance to run in eight tries in a 44-6 victory that secured them the title of Nordic Cup winners 2014. The opening exchanges were fierce and a lengthy stoppage was necessary after just seven seconds when Sweden’s Paul Briggs came off worse in the first hit up of the game. Denmark’s Jesper Ika, currently playing at Leigh East took the ball from the kick off and the collision left Briggs out cold and eventually on his way to hospital. Sweden were forced to use their first interchange, and suffice with just 16 players for the 80 minutes.

Denmark were first on the scoreboard, Rich Groom playing at hooker rather than his more usual position of stand-off, going over after a series of busts and half breaks up the middle of the field. Groom converted his own try for 6-0. Denmark were soon celebrating again when a precision kick from stand-off Eyles was collected by Christoffer Ellebirke in the corner of the in-goal area. Groom could not convert from the right touch line, but this proved to be his only miss as he finished the game having slotted six goals from seven in a personal points tally of 16.

However Sweden were not about to let the Danes have it all their own way and hit back at the end of the first quarter. Half-back Fabian Wikander, Sweden’s man of the match, going over and converting his own try to make it 10-6. A crucial patch of the game then followed as the Danes struggled to put daylight between the teams and Sweden looked for the score that would give them the lead. The Danes benefitted from better execution of their kicking game in this period, as Eyles tested the Swedes with clever attacking kicks and good chasing and fierce tackling from the Danish line kept up the pressure. At the same time Sweden twice missed touch from penalties and failed to exploit the blustery conditions, often kicking straight to full back Josh Whitehead, who made significant yardage and didn’t drop a ball all game.

Denmark went to 16-6 when half-back Viiga Lima put centre Martin Petersen-Scott through a hole in the defence, but Sweden were still very much in contention and pressed hard on the Danish line. Denmark had to survive three consecutive sets in their own 20 as Sweden threw everything they had at them. Second row Orveh Melchior and captain Eugene Hanrahan were at the centre of most of the defensive work and somehow the Swedes couldn’t quite find the way through, several times being held up just short.

While Sweden had to contend with only having three available subs for the whole game, Denmark had a good deal of experience on the bench, and coach Nigel Kitching spelled his forwards well. Silas Mubanda came on at loose forward, and it was his explosive running that was rewarded with the last try of the first half. Denmark going in to the break at 22-6 and finally sensing they had a little bit of breathing space.

In the second half the Danes sought to press home their advantage. Man of the match Emil Borggren had looked dangerous from centre and after several breaks he was rewarded with the first two tries of the second half. Both times going over on the right hand side after good build up work by the forwards. Replacement hooker Bailey failed to convert the second try.

Petersen-Scott also picked up his brace, with an excellent individual run that took him past several tacklers and through under the posts. Tempers were getting a bit frayed in the final quarter, but generally referee Craig Swanson kept good control and it was to his and the teams’ credit that it didn’t get out of hand. Eventually Sweden were given a team warning for persistent infringements and finally centre Maake Fakaosifolau was sin-binned, which was a disappointing end for one of Sweden’s most combative players, who had taken the fight to the Danes for most of the game.

There was still time for second-row Neil Smith to round things off with a final try – a worthy reward for all his hard work in the engine room, and especially sweet after he had earlier been on the receiving end of the game’s biggest tackle.

After winning 16-10 away in Oslo, this result made Denmark Nordic Cup champions for the first time since 2011, the competition’s inaugural year, and thereby the first team to take a second title. Sweden now go on to their home fixture against Norway to establish second and third places. Paul Briggs will hopefully be fit for that game after a visit to the local hospital established no serious damage.

Sweden coach Ash Brown: “It was a brutal match, that let the best of Danish rugby league shine. Sweden lost the soul of the team Paul Briggs in the first tackle of the match due to a heavy collision.  The tone of the game was set from there. The massive Danish forward pack laid the groundwork for some slick moves from the halves and outside backs. The young Swedish side showed plenty of heart, but were out gunned on the day.”

Denmark’s man of the match Emil Borggren: “It was a great experience representing my country in one of the finest sports. Our overall strength, speed, and skill is what led us to be successful in earning the Nordic cup. I'm very proud to be a part of this team, and hope to watch rugby league excel in Denmark as a sport.” 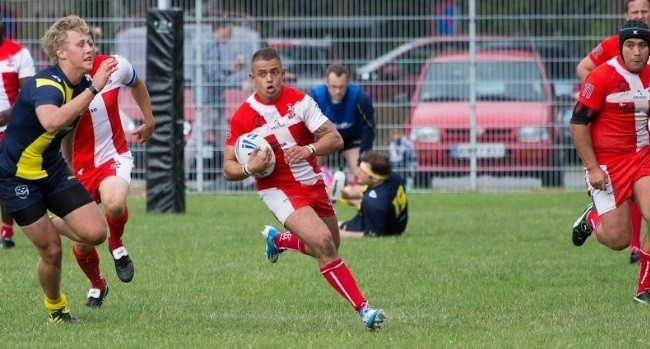