The physicality of the match showed both nations wanted to avoid coming last in the Nordic Cup. Denmark, the 2014 champions after two victories, sent representatives to the match.

Sweden received the kick off but quickly turned the ball over due to a knock and in a flash Norway were over for a try out wide from hard running Sonny Mellor. Sweden then took control with a massive amount of territory and possession playing in Norway's half for most of the first half but struggled to convert it into points. A try finally came from good ball movement and a piece of individual skill from one of Sweden's key players, Fredrik Enstad. Captain Fabian Wikander converted, ending the first half 6-4 to Sweden.

Points came quickly in the second half. Sweden’s Andreas Nilserius had a strong game kicking in general play and directed the attack. He put Carl Lindblom through a gap for a try close to the posts. Seven minutes later Maake Fakaosifalo busted through the defence for another 4-pointer. Throughout the game Buster Derk's runs in attack and solid hits in defence made him the player to watch.

In the 55th minute Norway were down to 12 men after Fred Ostvold was sent to the sin bin for 10 minutes for a dangerous tackle. Tempers were starting to flair in the second half and once Sweden regained their composure they dominated possession, with Christopher Vennerberg scoring Sweden’s fourth and final try with a scything run through the defence Wikander’s fourth goal from as many attempts gave his team a 24-4 lead.

Norway’s Fred Ostvold took advantage of slackening home defence and went over for a try. Six minutes later Sonny Mellor was over again for the last points of the game.

Sweden played a great team game but credit is due to Viktor Cordes and Thomas Olausson who really threw themselves into the game. Iain Lednor (pulled hamstring) and Carl Lindblom (strained bicep) had big games despite carrying injuries.

Coach Ashley Brown said, “I was very impressed with Sweden's solid defence and also with the average age of the players in the early 20s we displayed a great amount of courage and commitment in the international arena.

Sweden's manager Paul Briggs was happy with the fact 12 players were natural Swedes with only two expats and two heritage players. “With already one player down and a bench of only three due to a last minute injury everyone dug deep to get this win.” 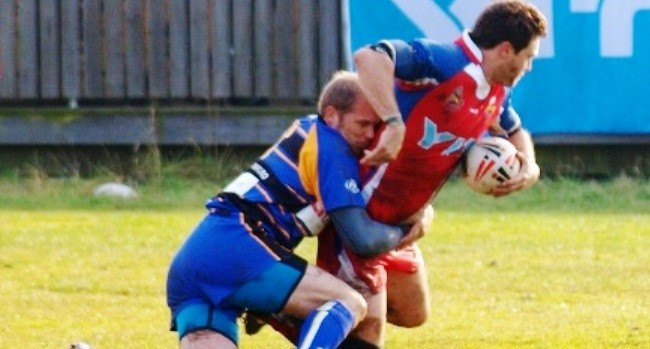