Wales went one step closer to winning the 2015 European Championship on Friday night after another stunning display in attack and defence gave them a 14-6 win over France.

France hadn’t and still haven’t won a test in South Wales since 1948, this including a mauling at the hands of Western Samoa in Cardiff in the 1995 World Cup.

Early chances at either end but defences were on top in the first quarter of an hour. Both lines were pounded, Elliot Kear making one try saving tackle, while at the other end, Courtney Davies’ grubber was well collected. France thought they’d scored on 20 minutes in but a pass to the unmarked Jordan Sigismeau was so far forward it almost made the clubhouse.

Wales finally broke the deadlock on 27 after Dalton Grant intercepted a stray pass and ran 60 metres to score. Courtney Davies missed the kick. France criminally kicked a penalty that didn’t reach touch and was collected well by Rhys Williams. And with Wales attacking near to the end of the half, Christiaan Roets was a metre away from scoring as the whistle blew.

The home side extended their lead five minutes after the break as Joe Burke did well to receive the ball near to the sticks and force his way down through a pile of Frenchmen. Davies easily converted to make the score 10-0. It was a spectacular third try for Wales as Courtney Davies kicked a grubber and then ran around his marker to leap on it and score in the corner. He failed to land the conversion but it gave Wales a healthy 14-0 lead.

Wales continued with their heroics at the other end as Joe Burke stopped an unimaginative French attack. And when Connor Farrer ran well to leap onto a loose ball and then win a penalty, Wales thought of kicking for goal, but in the end ran the penalty but the move ended in a knock-on. More heroic Welsh defending stopped Benjamin Jullien from crossing, but the French persisted. They won a penalty a metre from the sticks but wasted their chance after penalised themselves for crossing when William Barthau had created a scoreable chance for Olivier Arnaud.

Wales continued to outwit their opponents ensuring that if they couldn’t score straight away then the clock would be used up. Straight out of the training manual, Davies kicked the ball out to give France a scrum, then as Theo Fages looked to run the ball out, he was forced into a goal-line drop-out by the combined force of Rhodri Lloyd, Ollie Olds, Steve Parry and Christiaan Roets. Again the Welsh defence continued to impress. 18-year old Port Talbot youngster Regan Grace made a mark on his debut with 10 minutes to go, picking up a Barthau grubber in the Wales goal area to deny les tricolours yet again. From the goal-line drop out, Rhys Williams nicely collected another standard kick to again stop the French from scoring.

Wales were seven minutes from their first clean sheet since the famous 68-0 hammering of Papua New Guinea in 1991 but the blues finally broke the wall of red as Mickael Simon scored under the sticks and Barthau quickly landed the extras.

But France didn’t have enough in the tank to get anything more and Wales go to Ireland next Saturday knowing that a draw or win will give them the trophy they last won in 2010. 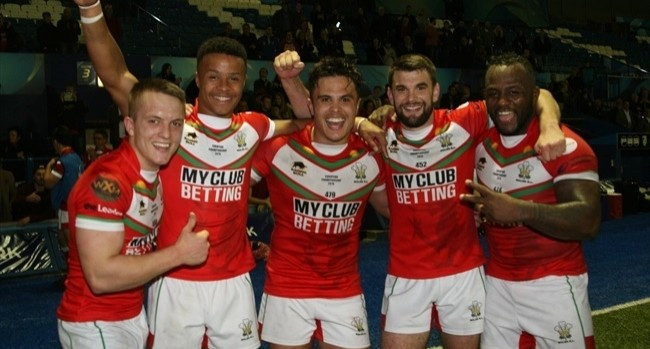