New USA head coach Brian McDermott tasted victory in his first game in charge, as the Hawks held on to defeat Jamaica 20-14 in the opening match of the Firehouse Subs World Cup Qualifiers – Americas, in Jacksonville , Florida. An extremely strong wind throughout made cold conditions even more difficult, the hosts impressive out of dummy half coping with it, while the visitors put down too much ball.

“It was very tough game, a really challenging game,” said McDermott. “The Jamaicans were a group of very big and athletic men that needed to be defended. We toughed it out to get the win, I was really pleased with our commitment to each other.”

The Hawks were best served by Kristian Freed at hooker, while skipper Mark Offendahl was a towering presence. “I’m very happy the boys hung in there,” Offendahl noted. “We made it a bit tough for ourselves with a lot of knock-ons and penalties but, to our credit, we hung in there and got the win. We had a game plan and when we did stick to it we dominated.”

USA got off to a terrific start, posting two tries in quick succession to take a 10-0 lead. Offerdahl powered over for the first in the 10th minute, Freed gaoling and, after the Reggae Warriors had again spilled the ball, Taylor Howden went over from close in. Jamaica dominated possession for the rest of the half, winning eight penalties in a clash of numerous huge collisions and the occasional flare up but, too often, the visitors surrendered the ball in promising positions.

Prop Ross Peltier was a stand out for Jamaica and he sniped over on the half hour, Joel Farrell converting to narrow the gap to four points. Soon after, USA debutant Sam Carson was sinbinned for attacking the legs of a kicker and, as the half ended, Omari Caro followed him to the sidelines after being shown a yellow card for an off the ball incident.

A flurry of tries at the start of the second period saw the game open up. Powerful centre Danny Howard was the first across for the Hawks from another superb short ball from Freed, who goaled, but Jamaica hit back when Farrell picked up a stray pass and scorched to the corner on a 70 metre run, his conversion attempt wide in the wind. Some good hands from the hosts restored their ten point advantage when full back Corey Makelin joined the line to go over in the 49th minute but from there on in it was a USA rear-guard action as the Jamaicans again had most of the ball. Tenacious home defence kept the visitors out until two minutes from time when the ever-industrious Peltier claimed his second score.

“It was a really exciting game and I think the fans would have been really pleased,” said Jamaica head coach Romeo Monteith. “It was competitive until the end and I want to congratulate the USA on their victory. We just need to regroup for Canada. We have a few injuries so hopefully we’ll be able to get them back on the field. “We were pretty tough in defence even though we let in two soft tries, but overall for 80 minutes I think we were really solid, which pleased me a lot. There are areas for us to improve though, we could have shifted the ball better; our strength was at centre and wing. We needed to move the ball a lot earlier.”

The next match is on Tuesday when Jamaica face Canada in DeLand, Florida. 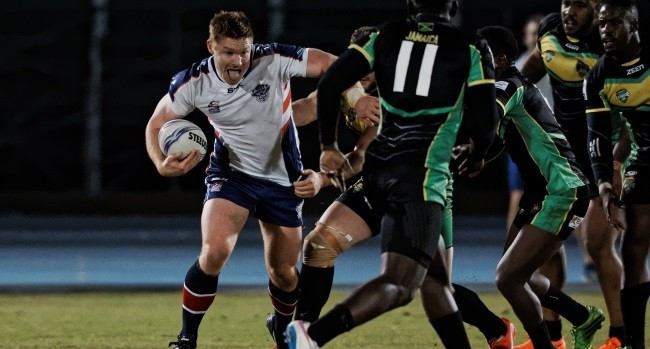