EUROPEAN CHAMPIONSHIP C - GAME TWO
Ukraine secured European Championship C with another emphatic win over a game Czech Republic side, running in 7 tries in a dominant second half performance.

The home side, roared on by 250 spectators at the home of the Mad Squirrels in Vrchlabi, fought hard against their bigger rivals and matched them in the physical stakes throughout a tough first half, but the loss of Patrik Koliska with a shoulder injury early in the second half halted their progress and saw Ukraine take over.

Ukraine opened the match with a first minute try from centre Nikolai Shalaev. The Czechs very soon replied with a try and goal from Key Playmaker Patrik Koliska to raise hopes of a big upset win.

Ukraine showed their greater experience from a year playing in European Championship B and forced their way ahead with three tries in quick succession as they found more space and the Czech team started to miss tackles. With the score threatening to run up, the Czech defence tightened up and stonewalled the Ukrainian attack for the last 10 minutes of the half, leaving the score 20-6 to Ukraine at Half time.

Ukraine kicked off the Second half with another quick-fire try side score from Andrei Shakura to extend their lead, only for the Czech’s to answer back straight away with Tomas Ricica running clear to go over for a well-received try, converted by Koliska to reduce the deficit.

The match then turned on an unfortunate incident as Koliska injured his shoulder in a tackle and was ruled out for the rest of the match. This took all of the Czech Republic’s momentum and saw the Ukrainian’s take the initiative in the match as Aleksandr Kozak scored the first of his two tries and the first of seven second tries in 32 minutes in the 48th minute. Wave after wave of Ukrainian pressure told on the tiring Czech defence and tries from Khrusyuk, Grankovskii, Sivokoz, Troyan and Shakura saw the scoreboard rattle up and the game become decidedly one-sided by the end. 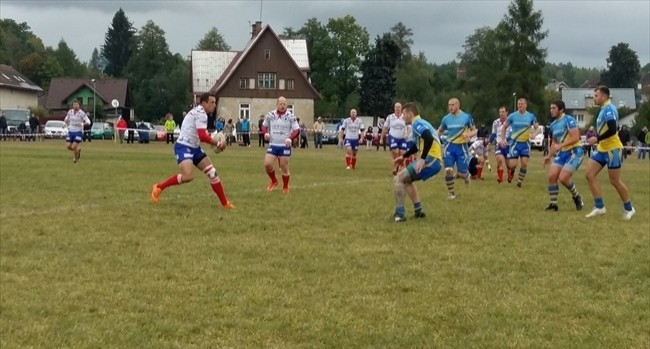