An experienced Belgian team got off to a winning start in the Triangular series after a dominant second half performance saw them power past a German side who must now beat the Netherlands to avoid the wooden spoon.

Germany took an early lead in Dusseldorf through their captain Mawuli Amefia, but struggled to keep their more experienced opponents at bay, with strong running and decisive passing putting Leclerq and Bertrand over for well taken tries.

Despite the pressure on their line, the Germans began to get into the game and came close on several occasions to finding a try, only to be held up as they attempted to truck it up the middle, rather than sending it out to the wing.

The pressure finally told and Amefia got his second try with a quick turn of pace that saw him speed clear, with Keinhorst adding his second conversion to give Germany a 12-10 lead at half time.

The game continued at a ferocious pace in the second half with both sides trying to force a way through. This brought a number of handling errors from both sides as passes were thrown in hope as much as expectation, with German forwards particularly guilty. When the breakthrough came from Blauzaquois with 10 minutes left, it signalled the end of the German resistance and two more tries came from Guilmard and Leclerq with his second as Belgium emerged from the battle with a 26-12 victory.

“It was very disappointing to have lost the match through such schoolboy errors, especially after we had contained the Belgian threat for so long” commented joint-coach Bob Doughton. “Simon and I will review the video footage and we will have to rectify those faults before we face Holland next Saturday in Rotterdam”, he added.

Belgian Captain Nicolas Bourguin spoke of his team’s preparations ”We were prepared to face a good side and it took time to get through their solid defense. The battle in the middle field was the key of the game and we tried to managed it correctly. Next step is Holland, we know that it should be a very competitive game, so we must be prepared.”

Germany travel to Rotterdam on Saturday 13th August to face the Netherlands in the second game of the series. 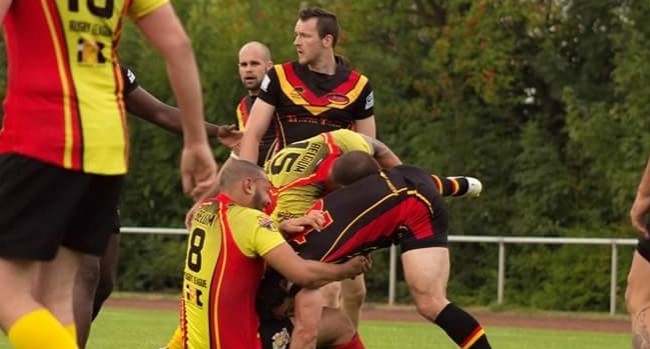