A hat-trick on either side of half-time by Danish winger Mads Hansen, one of seven debutants in their side, saw Denmark XIII defeat Sweden XIII 50-18 in Roskilde, in the final match of the 2016 Nordic Cup, already won by Norway.

Five unanswered second-half tries sealed the win for the Danish XIII after the visitors had led three times in the opening half but ran out of steam.

“We were especially pleased to introduce several debutants, who all did themselves proud,” said Danish RL President Richard Munk Naylor. “These two sides have put on higher quality performances but that’s part of the process of bringing in new talent and the players gelling together. I have a feeling that both Denmark and Sweden will be better next year.”

The hosts had to wait until the stroke of half-time before they took the initiative, Silas Mubanda going over for his second try to level the scores at 18-18. And in the final set of the half, a flowing move from the restart saw Hansen released down the right touchline to score his first touchdown and the Danes never looked back.

After Hansen’s second and third tries, another debutant Keli Rasoqosoqo grabbed a brace, either side of Danish captain and hooker Steve McCarthy‘s try.

The Swedish XIII had started well, prop Luke Roberts went over from their first set, the score cancelled out by Steven Kristiansen’s impressive solo run, before Michael Strøyberg got on the end of some good right-to-left handling to put the visitors ahead once again. Powerful Mubanda crossed for his first try from a scrum but when Swedish skipper Sebastian Hylander followed up his own well-weighted grubber to score and hooker Benjamin Rehmie added his third goal, it looked as though the Swedes might take a lead and psychological boost into the break.

But the Danes had other ideas and were relentless in the second half, Rasoqosoqo taking their total to nine tries and bringing up the half-century. Sweden showed great spirit in the closing 12 minutes, holding their opponents scoreless.

“We stuck with the Danes for the first half with a young team,” said Swedish Coach Ashley Brown. “I couldn’t fault the boys that made their debut and the experience will have done them good.” 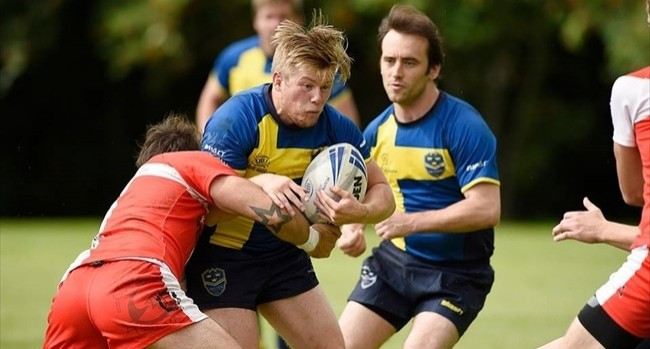