Germany retained the Griffin Cup but only just, after an impressive display from a new-look Dutch side, the visitors holding on to triumph 8-6 in Rotterdam. The final hour of a tense match was scoreless following Emerson Werk’s converted opener for the hosts on eight minutes and tries by Jannek Hagenah and David Ziekursch for Germany.

According to Thijs van der Zouwen, the Nederlandse Rugby League Bond president: “The NRLB fielded our strongest national team yet. Never before have our players played so many matches during the domestic season, nor have we had so many trying out for the squad in the Netherlands. We had a great training camp in the week running up to the match. Our national coach Kane Krlic selected a great set of lads that are all willing to work hard, listen and improve themselves,” he continued. “In a limited amount of time he managed to form a tight-knit team, he has really raised the level of the sport and his knowledge of the game has been a tremendous help to both the players and the coaches in the Netherlands.

“We might not have won this time but we feel we can build on the game. Ten out of the 17 players were under 24 years old. We lost quite some experience with the absence of veterans like Jorge Vasquez and Jason Bruygoms but their replacements did an excellent job.” Van der Zouwen added: “Our hooker Joe Storm, for instance, showed great perseverance when he dislocated his shoulder but returned to the match after the medical staff managed to pull it back in. We hope to keep the core of this team together and build on this in the coming years.

“The German team and staff are a good bunch of guys, post-match turned out to be quite productive. Both nations are looking to see how we can grow grassroots league and we discussed how we can help each other out. Hopefully Dutch clubs will be playing friendly fixtures against German teams in the coming months.”

Germany co-coach Bob Douhgton said: “It was a tough encounter with the Dutch having a much-improved side and Germany fielding only domestic players. We were unable to take advantage of good field position in the latter stages, being camped in the Dutch quarter for long periods. Thankfully our defence held up and we were able to come away with the win, defending the Griffin Cup for another year.” 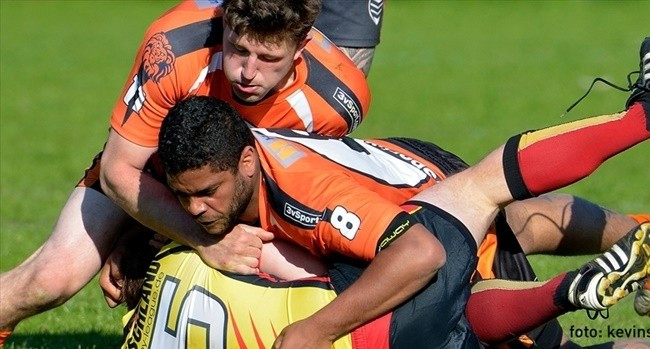