An impressive Ireland have upset Italy at Barlow Park in Cairns, claiming a surprising 36-12 victory and throwing the pre-tournament predictions out the window. A composed performance across the park featuring a haul of six tries will leave the Wolfhounds hopeful of progressing out of the group stages.

Many would have expected the stifling heat of Far North Queensland to trouble the Irish, but they came out firing in the early stages and took a commanding 14-0 lead by the heat-policy enforced quarter-time break.

Missing the experience of veteran Terry Campese, Italy had a shaky first half as they ran into the wind and against a determined Ireland line-up. Their slow start and failure to make an impact in the opening quarter of the match left them trailing for the entire match.

Irish winger Liam Kay had his second try by the 30th minute, putting the Irish 20 points up and all over the Azzurri midway through the first half.

Local Northern Pride player and Italy centre Justin Castellaro nabbed an intercept just before half time, helping Italy remain in comeback distance at 20-6 behind. Tensions rose immediately after the try when the two sides met in a melee after Italy halfback Jack Johns dropped the ball from the kick off.

Following the break, Italy lost Johns when he left the field with a shoulder injury forcing another re-shuffle of the side. A stunning catch and pass from Josh Mantellato gave Italy their second try as Nathan Milone crossed and helped bring the deficit back to 20-12 after a successful conversion.

The momentum had briefly swung to an uplifted Italy and Ireland began to feel the pressure as the Azzurri peppered their line.

Eventually a breakaway run from Ireland propelled them up field and they extended their lead when Kyle Amor barged his way over next to the posts. Leading 26-12 with 25 minutes left to play, Ireland made the most of their opportunities when James Tedesco slipped over collecting an Irish kick. Michael Morgan picked up the loose ball and crossed to make it 32-12 at the drinks break.

With the game almost beyond their grasp, Italy fought hard to find a way across the line, but a number of near misses ensured the scores remained the same until Louie McCarthy-Scarsbrook signed the resounding victory off with a try in the 78th minute. 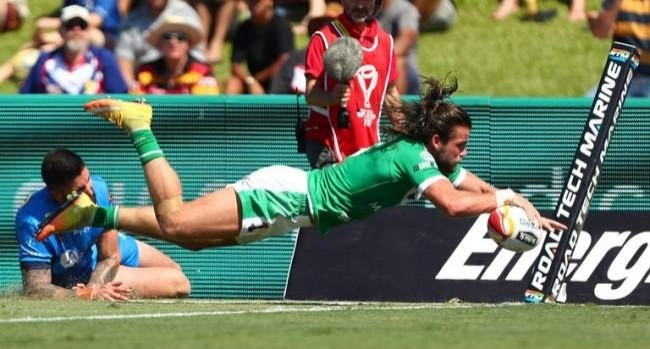