Russia duly claimed the European Shield East crown after a comprehensive ten-try, 54-4 win over Latvia in Riga. Winger Rustam Bulanov led the way with a hat trick for the Bears as impressive scrum half and player/coach Eduard Ososkov ran the show.

The opening salvos were evenly matched, with both sides struggling to complete their sets in midfield, but it did not take the Russians long to get into their stride when a neat passing move sent winger Kirill Nechaev over for the first try in the ninth minute. The visitors were in again five minutes later when the ball was shipped to the left for Bulanov to cross and he doubled his tally soon after, cleverly stepping two covering defenders.

With Ososkov at the heart of everything, Russia posted their fourth try from the kick off as Sergei Gaponov charged over from 20 metres out, Aleksandr Lisokony adding a superb conversion, his third of the afternoon, to make it 22-0. Latvia regrouped and tightened up their defence for a solid 10 minutes but two converted quick tries just before the break from Bulanov and second rower Ilygiz Galimov, who powered his way over, saw the Bears lead 34-0 at the interval.

The Russians added a try at the start of the second half as man of the match Ososkov made the most of some confusion in the Latvian defence as he pounced on a loose ball. Denis Loschilin made the line for their eighth touchdown as the Russians tried to keep the ball alive at every possible opportunity. That proved costly in the 58th minute when Latvian winger Kristaps Jakushs intercepted and raced 60 metres for the hosts’ only try of the afternoon. Russia added two further tries, Aleksei Nikolaev crossing in the 62nd minute and Galimov claimed his second and bringing up the half century five minutes from time, Ososkov taking over the kicking duties and successfully adding the extras. 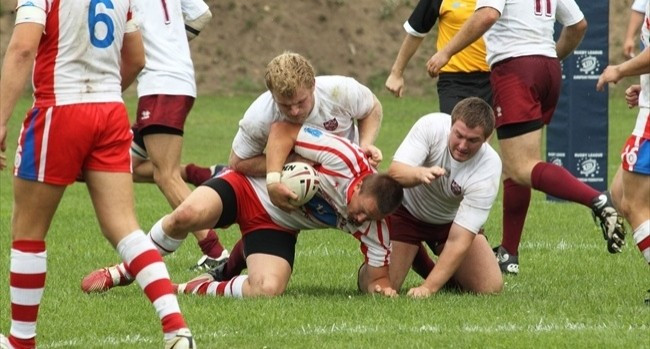