A sensational end to the running game season saw Jamaica and Scotland share the spoils, 30-all, at the Millennium Stadium, Featherstone in a Test match for world ranking points.

The Reggae Warriors scored six tries to five and came back from 30-10 down two minutes into the second half, superbly led by Ashton Golding - starting at loose forward for the first time - and Izzac Farrell on debut.

Scotland were excellently served by St Helens-bound James Bell, Barrow’s Charlie Emslie posting a try double for them on his international bow.

Jamaica raced into a 10-0 lead with tries from Jymel Coleman and an 85 metre pick up by Ben Jones-Bishop after Sam Luckley had lost the ball, the Bravehearts then holding out Golding and Izzac Farrell and preventing Mo Agoro crossing in the corner with some outstanding goal line defence.

Keenan Tomlinson was sinbinned in the 25th minute as Jamaica’s discipline let them down and Scotland hit back with Emslie’s first – from a fine pass by Bell – and further tries from Ross Oakes on the overlap, Ben Hellewell diving on a loose ball and Dale Ferguson, all converted by Lachlan Walmsley on his first international start – to lead 24-10 at the break.

Emslie’s second from a spilt high kick seemed to have the Scots firmly in charge, but Jones-Bishop grabbed his brace, Joe Brown went in on the hour and Jordan Andrade crashed to the posts with 15 minutes to go.

Ferguson was sent to the bin with five to go for a high tackle and, switching play on the last, Jamaica’s Alex Brown powered into the corner to level, Izzac Farrell’s conversion attempt just falling short.

In the final minute, Ryan Brierley’s drop goal attempt for the Scots was touched in flight and the Reggae Warriors held on from the resulting drop out. 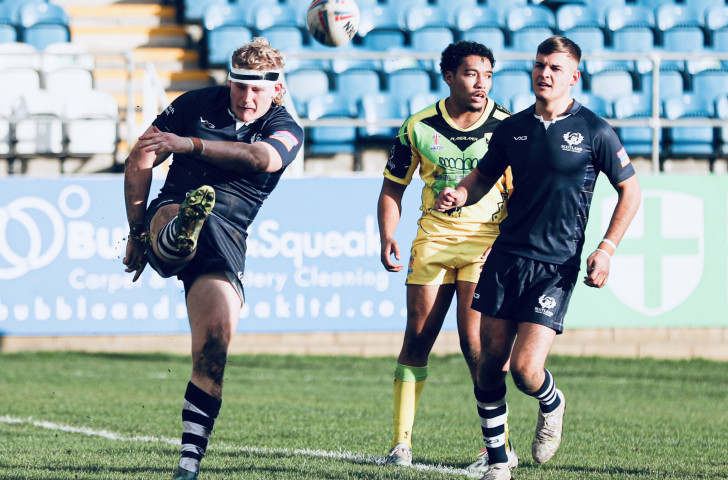