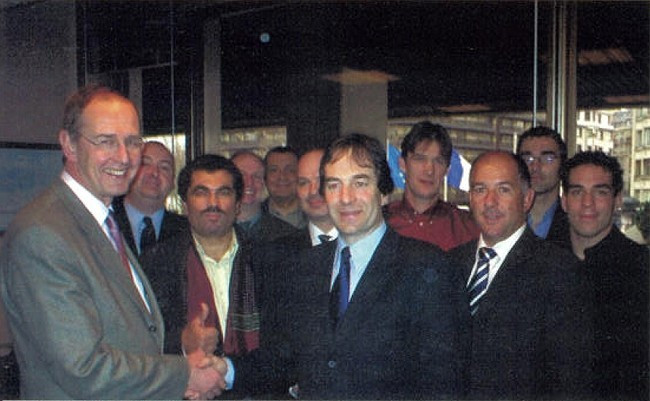 The Rugby League European Federation was formed at a constituting general assembly on 9/10 January 2003 in Paris following an initiative between Richard Lewis of the Rugby Football League and Jean Paul Ferre of the Fédération Française de Rugby à XIII.

Ferre and Lewis became the chairman and vice-chairman respectively, with Nigel Wood and Nicolas Larrat sitting as Directors.

In October 2004 Ferre resigned, with Lewis succeeding him as chairman. Larrat became vice-chairman.

In keeping with the revitalisation of the continental game that was being spearheaded by the RLEF, the European Cup, dormant since 1996, was revived in 2003 with an ambitious six-team, two-group format, including debutants Scotland, Ireland and Russia.

Kevin Rudd, a former Scotland international, became the RLEF executive officer in 2004 and focused on creating an international calendar to encourage cooperation and competition between the growing list of Rugby League playing countries.

This would result in the formation of the European Shield and Bowl, which have been played annually since 2006 by second and third tier nations and are now known as Euro B and Euro C. Consultant development officers were taken on in various European countries within the first five years of the RLEF’s existence.

In December 2009 Rudd resigned his position and was succeeded in the summer of 2010 by Danny Kazandjian, formerly the Euro-Mediterranean Development Director. Kazandjian became the RLEF’s first full time general manager.

In August 2010 the RLEF Council adopted a new constitution, became incorporated and elected Nebojsa Sretenovic, Serbian Rugby League Federation president, and Scotland Rugby League Director Graeme Thompson to the Board, a move that underlined the growing European dimension of the federation Membership.

Operationally, the RLEF adopted an eight-year strategy (2010-17) based around the vision and values of empowerment, dynamism and the cultivation of Rugby League culture and focused on increasing participation numbers, creating strong RLEF Members and a more corporate RLEF, which, for administrative/strategic purposes, divided into the Atlantic, Middle East North Africa, and West, Central and Eastern Europe regions. In 2011 the administrative MENA region became MEA, encompassing the whole of Africa.

In 2018, the RLEF introduced an U19s European Championships to give aspiring youth players an opportunity to represent their country at European level and is moving to introduce Women’s and Wheelchair competitions from 2022 and 2023.

In 2021, the RLEF rebranding to become European Rugby League, in keeping with the naming of the International Rugby League and the southern hemisphere Asia-Pacific Rugby League.