Malta ran in 12 tries in their biggest victory on home soil as they defeated Montenegro 66-6 at the Mosta FC ground on Saturday evening to win the inaugural Medieval Shield.

Sixteen-year-pro halfback Jarrod Sammut led the way with 30 points from three tries and nine goals, as the visitors made their first foray into the international arena for official ranking points.

A 26-degree afternoon gave the Montenegrins an introduction as warm as the weather, and the home crowd was treated to an exhibition of rugby brilliance.

It was a number of amazing presentations from the Malta players, centre Zarrin Galea claimed a treble of tries, his first within the first 15 seconds, but later confirmed as not a world record time.

Malta were up by 18 points inside 14 minutes, Josh Gatt and Sammut crossing, Montenegro claiming their first points five minutes before the half-time break when Red Star loose forward Balsa Zarkovic made history, Srdjan Popovic adding the extras for a 34-6 scoreline at the break.

Jean-Pierre Zarb, Malta Rugby League president who played at prop, commented: “It was a good performance, we had some quality players on the field and the result was a little harsh on Montenegro, they had a lot of heart. We played for the full 80 minutes and hopefully we can now plan for another match on home soil later this summer.”

Zarb produced arguably his best performance in Malta colours, other local products Robin Cutajar served Malta well at hooker, and head coach Roderick Attard handed debuts to local players Nicky Vella and Kyle Gauci – the latter who displayed some impressive involvement for a 17-year-old, and on the end of a backline movement – St Julians’ Mark Camilleri crossed for a four-pointer.

From Malta’s overseas contingent, Salford Roosters fullback Andrew Muscat crossed for a try with Hunslet prop Dean Zammit also crossing the chalk, Medway Dragons’ second rower Kaine Dimech grabbed a try in each half for the red and whites as they kept up their dominance in the second period. London based lock Joe Briggs (pictured) and skipper Karl Cassar were equally impressive, Australia based centre Josh Gatt also claimed a four-pointer of his own.

Jarrod Sammut, who delivered a genuine masterclass, added: “It’s great for the international game, a lot of work goes on behind the scenes to make this happen and the Maltese community really got behind us. For me personally it’s not about the individual points haul but more a great effort by the team to come away with a home win which we’ve been desperate for over the last ten years and I want to thank everyone involved for making the day so special.”

Currently playing at Barrow Raiders and released to play for Malta this weekend despite the Cumbrian derby between Barrow and Workington Town on Sunday afternoon, the 35-year-old continued: “The body’s holding up really well, I’ve got some years left in me, feeling great and still loving the game. It would be a step back if I didn’t pass on my knowledge and experience, that’s why I love playing for Malta.”

Montenegro head coach Ian Giddings said: “I’m immensely proud. We were up against a fantastic side and it’s a big learning experience for these guys. The tears in the dressing room shows their passion and pride for their country and they put in an amazing performance against some astonishingly good players. It is nothing but a positive for Montenegro and Balkan rugby league – certainly something to build upon.”

Malta went into the match ranked 15-in-the-world, a record international ranking for a Maltese national team, and Malta assistant coach and Team Manager Anthony Micallef said the Maltese are in talks to announce more fixtures this European summer, for an international in Europe and also Australia.

“Tonight was an opportunity for Malta to showcase Rugby League to its people for the first time in four years, the players did their best at that. We’re hoping this match gives impetus to a couple of other European nations to complete talks to settle on another match for Malta before Autumn”, said Micallef.

Montenegro will head home proud of their efforts, special mention to skipper Srdjan Popovic for a leading role for the visitors. 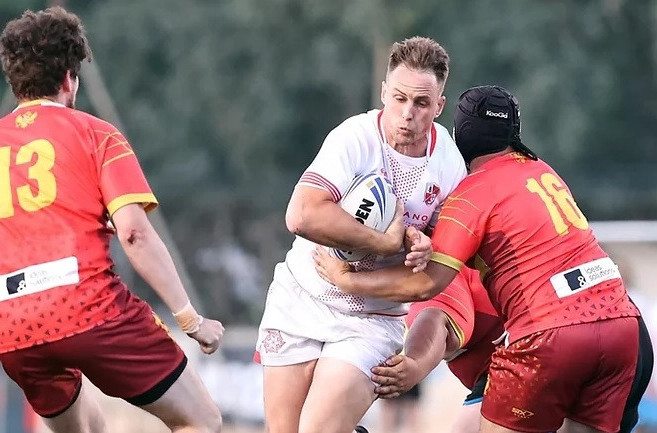