In a match moved to Maesteg because of the incessant rain in the area Lebanon proved too strong, overwhelming the Irish and in some way atoning for the Emerald Isle denying them the chance to go to the 2008 World Cup.

The Cedars started at a blistering pace and effectively had the contest won inside the opening quarter with a four try barrage from which Andy Kelly’s men never recovered.

There was a less than salubrious start, Lebanon sending the kick off out on the full and Ireland failing to find touch from the penalty.

Lebanon scored on their first possession, lively stand off Liam Ayoub breaking through some poor Irish defence and combining with Travis Robinson, whose pass sent Adnan Saleh across for an early score

Cedars continued to dominate the early action and further increased their lead when an intelligent grubber by Ayoub was missed by the scrambling Wolfhounds and snapped up by Joshua Mansour who touched down in the corner, Jamie Clark again missing the conversion from out wide.

Luck played a part in the next try as the Lebanese defence forced a knock on and, from the resulting scrum, Travis Robinson launched a high kick into the air and reacted quickest to take the ball and go over unchallenged, his twin brother Reece failing to add the extras.

Ireland began to launch into life and forced Lebanon to defend their line but could not find a way through with both James Coyle and Liam Finn knocking on when a try looked certain.

Lebanon increased their lead, again through their varied kicking game, when a low scudding kick by Danny Chiha was further hacked on by Reece Robinson, the ball stopping just before the dead ball line for Clark to touch down.

It was 18-0 after 22 minutes when the Robinson twins combined together, Reece grabbing a touchdown and then putting Travis through for his second try to extend the lead further.

Ireland finally found a way through when they chose to run the ball on the fifth tackle and, after a clever passing movement, James Haley forced his way over in the corner following a disguised ball from Finn.

Finn set up Haley again, this time with an excellent high kick which dropped just in front of the line and the speedy Haley beat Travis Robinson to gather, Finn converting.

Lebanon stole back the initiative just before half time as a floated pass by Coyle was intercepted by Reece Robinson, who broke the tackle of Finn and ran 80 metres to score between the posts, making it 30-10 at the break.

Reece Robinson nearly went over again at the start of the second half but his grubber kick was snapped up Karl Fitzpatrick, who escaped several Lebanese tackles to clear his lines.

Lebanon looked more dangerous on the ball and were rewarded for their endeavour when Chiha was able to roll through several tackles and force his way over and they could have further extended their advantage if Chris Salem had not knocked on with the line at his mercy, following more great play by Reece Robinson.

Ireland were denied what would have been a try when a high kick from Finn was volleyed by Stevie Gibbons into the path of Brett McDermott, whose pass was taken by Coyle but he was thwarted by Reece Robinson and Saleh

Lebanon were denied a try when Mansour was adjudged to have his put foot in touch on a power play after Ayoub had found some space but they added their eighth when Fitzpatrick tried a risky pass and Reece Robinson picked up and scooted clear from distance to crown a man of the match display. 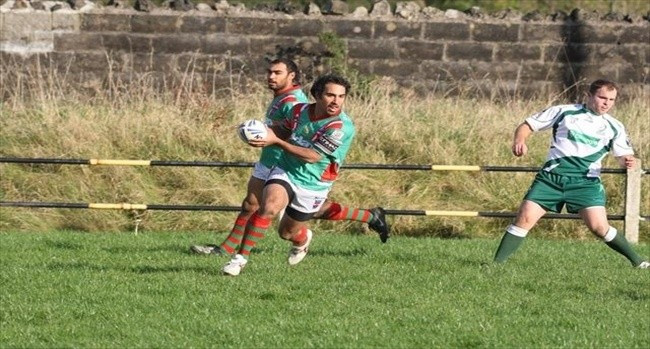