New Wales coach Iestyn Harris picked up silverware in his fourth match in charge as the Dragons took the rugbyleague.com European Cup, which they last won in 1995.

The Celtic nation that missed out on the World Cup last year, Wales have begun a new era in positive fashion and look set to be a re-emerging international force after a thrilling win in the last rugby league match at the Brewery Field for the foreseeable future.

Scotland lost out on winning their first senior trophy, despite a first half hat trick from Mick Nanyn, but were in with a shout until ten minutes from time in an expansive and entertaining encounter, Brendan Lindsay’s kicking in the first half their best attacking weapon.

For the second week running, it was a second half super show from the Welsh who trailed narrowly at the break but scored 14 unanswered points to give the code in the Principality a further boost.

A team filled with talented local youngsters, with man of the match, full back Elliot Kear a stand out and Lloyd White particularly eye catching, had just too much enthusiasm and skill for the Bravehearts, who lost Iain Morrison on the morning of the game with a chest infection.

The experience in the Welsh ranks was also crucial, Ian Watson playing in his 23rd international organising the side and putting in the astute kick for Rhys Williams for the game breaking try, while skipper Jordan James – in his 17th consecutive international – was a powerhouse up front.

Iestyn Harris tried to play down his own role in what is a terrific achievement. “We showed a lot of maturity despite being a young team which stands us in good stead for the future” he said.

Teenager Kear, who has already made an impact in Super League added, “It’s just great, we stuck to our game plan really well. We knew the Scots would be hard up front but we matched them and moved the ball wide. It is massive for all of us, we have been training really hard over the last month, it is amazing.”

His sentiments were echoed by skipper Jordan James, who retained the armband even though Ben Flower returned to the line up from injury. “It doesn’t get any better than this” he commented.  “To go from conceding 70 points against England last year to this is fantastic, I’m lost for words. Hopefully we can win this again next year and qualify for the Four Nations.”

Scotland started brightly and kept Wales in their own half, forcing repeat sets through the intelligent kicking of half backs Lindsay and Scott Moore.

After Wales were forced to drop out, Nanyn opened the scoring when Lee Paterson’s incisive pass gave him space to power over.

Scotland regained possession when Chris Beasley was in touch when catching the kick off and, on the fourth tackle from the scrum, Nanyn was again given enough space to crash over for a try awarded by video referee Ben Thaler.

Wales fought their way back and stole the momentum with two tries in six minutes; Kear putting on a step and speeding through a gap in the Scottish defence and Flower taking a great pass from White to give Wales the lead.

It was short lived, however, as Nanyn was able to complete a first half treble when Steele found space on the wing and sped through, leaving the Welsh defence exposed and positioned his centre partner to the line.

Wales started the second half brighter and forged ahead again when Christiaan Roets ran a superb angle onto Beasley’s pass and had enough pace and strength to take on Jamie Benn and score in the corner.

Scotland twice nearly found their way back into the lead, initially when Moore went for an interception but just could not grasp the ball and knocked it on.

Then, the video referee decided that Richard Fletcher was offside when Moore grubbered through to the Welsh line.

At the other end, Lee Williams knocked on when it looked like he would extend Wales’ lead after a great run from White, but that partnership did fashion a superb try soon after.

White’s delicate chip over was caught by Lee Williams and he put White, supporting on the inside, across for a touchdown worthy of winning a final.

Beasley was denied a try after the video referee adjudged that he had made a double movement in the tackle but Wales sealed the game when Rhys Williams beat Steele to the ball and scored in the corner from a brilliant kick by Watson.

Scotland coach Steve McCormack, although disappointed, picked the positives out of his side’s performance. “We were in the contest to the end” he said, “but it’s all about taking chances.”

“Wales were clinical in a game of small margins and all credit to them, they have a fantastic young team.”

“We can really build on this. Scottish rugby league is in great shape, although we are disappointed and don’t like to finish second. These guys have put Scotland RL on the map over the past two years”. 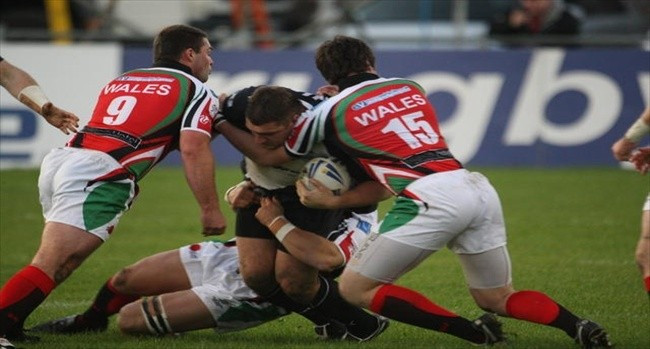